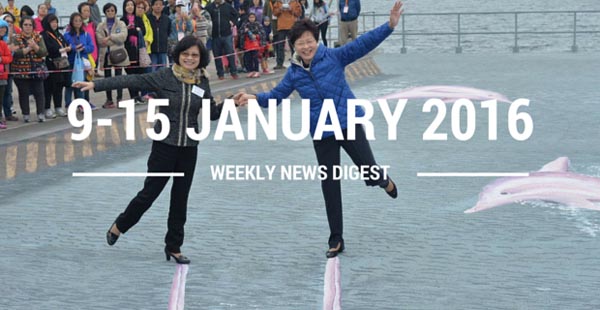 On wildlife conservation:
Government’s decision to outlaw local ivory trade applauded
Animal rights groups have praised the proposed measure as a historic “milestone” in response to a global outcry against the rampant poaching of elephants, although it is only the first step toward greater awareness of the value of endangered wildlife and respect for biodiversity.

Hong Kong ivory dealers call on Government to buy up stock if trade banned in city
Ivory traders called the proposed laws “ridiculous”., Some craftsmen want the Government to compensate them, or at least buy up the remaining legal stocks in the city, before enacting any plan to outlaw the domestic trade.

Young sea turtle found dead and entangled in fishing net south of Lantau Island
According to Gary Stokes, the Hong Kong-based director for South East Asia at the Sea Shepherd Conservation Society, the net was wrapped around the turtle’s neck, mouth and flippers, and said it was “quite clearly” the cause of death.

Smugglers’ paradise: The city’s incense trees are nearing extinction
Smugglers come daily and they are targeting all incense trees everywhere in the countryside. They cut down as many trees as they want and may take 20 trees in a night, leaving behind the trees they don’t need, hacked and dead.

Hong Kong’s Government Is Walking All Over Chinese Dolphins – Literally and Figuratively
A snapshot has emerged of Carrie Lam, the chief secretary of Hong Kong, standing on the nose of a Chinese white dolphin painted on the ground at Taipo Coastal Park. Tt perfectly captures the authorities’ destructive attitude toward the marine mammal, which is now on the brink of extinction due to a series of Government-led infrastructure projects that involve large-scale land reclamation.

On animal welfare:
Pet owner fined HK$2000 and sentenced to community service for abusing 5 dogs
A young female pet owner admitted to three counts of failing to provide sufficient food and fresh water to animals in confinement, keeping an animal in such a way as to cause it needless or avoidable suffering, and keeping a dog without a licence.

Hong Kong stall owner stopped from selling dog furs
A concerned citizen spotted the brown furs for sale on Kweilin Street and, having concluded that they were dog furs, reported the shop owner to the Food and Environmental Hygiene Department. A visit from the Department ended this sketchy practice.

CY: Small house policy has to be revisited
Responding to a caller on a Radio Television phone-in programme, Leung says there needs to be a review of the small house policy, which allows male indigenous villagers to build a three-storey house on a plot of ancestral land, in light of Hong Kong’s pressing need for more developable land.

Groups urge steps to save Tung Chung environment
Thirteen local green groups said work on the proposed Tung Chung New Town development extension poses a threat to the effectiveness of the nearby Brothers Marine Park and the Chinese white dolphin population. Proper mitigation and compensation methods should be in place.

Lantau panel suggestions spark worries about ecological impact
The Lantau Development Advisory Committee (LanDAC) has submitted a report on issues related to potential new development initiatives for Lantau Island. The report has sparked worries that Lantau could be developed into a playground for mainland visitors, given its suggestion of turning the “geographical condition of Lantau from an outlying island to a significant region of Hong Kong”.

On pollution:
Protesters in noisy landing
Twenty Ma Wan residents, in pajamas and sporting made-up eye masks, showed up at a Town Planning Board meeting on Monday to oppose the third airport runway plan. They said they were annoyed by the noise of aircraft flying overhead and criticized the Government and Airport Authority for ignoring their complaints.

More than 2000 people died prematurely from effects of air pollution in 2015, says local green group
Local NGO, Hong Kong Clean Air Network urged the Government to take measures to curb vehicle emissions locally, saying it was neither “meteorological nor regional factors” that had the most impact on air quality.

Voluntary light pollution charter launched
Launched by the Secretary for the Environment, the Charter on External Lighting starts in April. Organisations will be “invited” to turn off outdoor lighting that “affects the outdoor environment” from 11pm. Those who meet certain criteria will be awarded platinum gold awards in 2017.

On waste:
CUHK’s Shaw College breaks Guinness World Record for most glass bottles collected in an hour
550 alumni of Shaw College, current students and members of the public took part in the Follow the Green Brick Road: Glass Bottle Recycling Challenge event for the university’s 30th anniversary. They collected 1.1 tonnes of glass bottles.