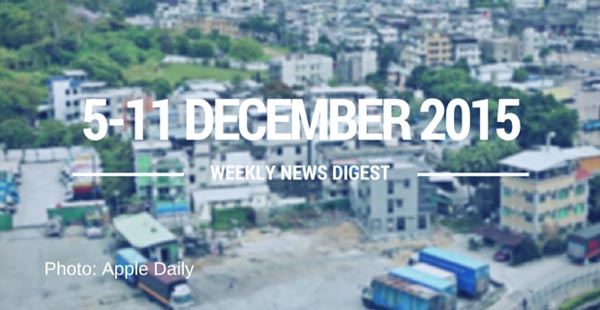 The following are the main environment/wildlife conservation related stories covered by Hong Kong’s Press for the week 5 – 11 December.

On climate change:
Hong Kong has set an ‘aggressive’ carbon emission reduction target, claims Environment Sec
At the COP21 Summit, Wong has also said that Hong Kong is aiming to become a low-carbon liveable city, and that there is a new target to reduce the city’s energy intensity by 40 percent by 2025.

On land development:
Kowloon’s last walled village residents to resist ‘robbery’ style redevelopment
The remaining residents of the last walled village in Kowloon will not move out, although the government has demanded they leave the 600-year-old village, as demolition is scheduled for late January. A concern group for the project has criticised the Urban Renewal Authority (URA) as a “robber” in redeveloping the village, using public money to replace it with two private housing buildings of 30 to 40 storeys.

Ombudsman slams poor regulation of NT graves
The government watchdog on Thursday lashed out at lax enforcement and regulation in the burial of deceased indigenous villagers in the New Territories (NT) due to the unclear division of responsibility among five different departments.

On energy:
Power companies have gathered nearly HK$5.7 billion by overcharging – report
Excluding CLP’s special rebate of more than HK$1.2 billion in August this year, the two power companies still have more than HK$4.43 billion in Fuel Clause Recovery Accounts and Tariff Stabilization Funds – with Hong Kong Electric accounting for HK$2.1 billion and CLP for HK$2.3 billion. The surpluses could allow 320,000 Island customers and 420,000 Kowloon households to be supplied with free electricity for a year.

Kai Ching contract did not specify water must be safe to drink, construction firm tells inquiry
The contractor responsible for building some of the Hong Kong public housing estates hit by the lead-in-water scandal this week appeared in an official inquiry, where they expressed their regret but denying any wrongdoing.

On pollution:
Hundreds, possibly thousands, of dead fish wash up in river connected to ‘tainted’ reservoir
Shoals of dead fish washed up on the banks of Shing Mun River last week, around the same time as Greenpeace released data indicating that five of Hong Kong’s biggest drinking water reservoirs are tainted with a potentially carcinogenic chemical, perfluorinated chemicals (PFCs).

On natural conservation:
Sharp Island North overtakes Hoi Ha Wan in coral coverage
Sharp Island has a coral coverage of 79.5 percent, surpassing Coral Beach in Hoi Ha Wan, which took the top spot in last year’s study at 79.4 percent, but only managed a 72.3 percent coverage this year, according to Ming Pao Daily.

On wildlife conservation:
Proposed marine park area wrong, says expert
A Hong Kong University ecologist and conservationist said on Tuesday that the 2,400 hectare marine park approved by the Advisory Council on the Environment north of the airport is in the wrong place to help sustain Chinese white dolphins off Lantau.