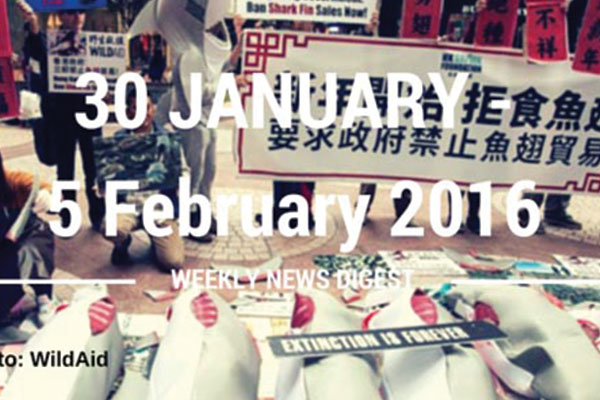 On wildlife conservation:
Wind farm project poses new threat to Hong Kong aquatic icon.
Southern Offshore Wind Power Development Co. Ltd., a unit of state-owned China Southern Power Grid Co.Ltd., is pressing ahead with the project despite its own environmental studies that show the waters in question are home to the endangered animal and other vulnerable species. Environmentalists are worried that the wind farm, about 10 kilometers off a marine sanctuary in Lantau and Soko Islands, will drive the animals from their habitat once construction starts.

On food safety:
Mass fish deaths reported again at Shing Mun River.
Authorities are yet to reach a conclusion on the reason behind the mass fish deaths despite holding an inter-departmental meeting.

On nature conservation:
Groups protest at trade in shark fins.
Members from WildAid and Hong Kong Shark Foundation also urged the public not to eat shark fin soup in their Lunar New Year banquets this year.

On waste:
Plastic paradise: Hong Kong’s packaging problem.
Plastic bag use has dropped since the government introduced a levy on them last year, but in a city where supermarkets routinely wrap individual fruit and vegetables, campaigners want legislation restricting packaging.

Government press release:
Steering Group on the Modification of Recycling and Refuse Collection Facilities in Public Places set up.

Additional news in the Chinese-language press: