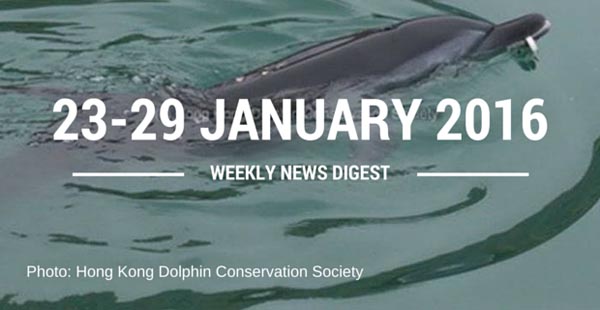 On wildlife conservation:
Shark fin soup still served at 98 percent of Hong Kong restaurants as restaurants choose money over environmentally friendly practices.
Over 98 percent of the 375 restaurants surveyed by the Hong Kong Shark Foundation serve the traditional dish, going against common assumptions that shark fin consumption is on the decline in the SAR.

Lost young dolphin ‘stuck’ in Tuen Mun harbour for over 27 hours.
A dolphin remained stranded in Tuen Mun’s Gold Coast Yacht Club for a second day. A spokesperson for the AFCD said that the Department would discuss countermeasures with dolphin experts at Ocean Park, and reminded yacht owners not to disturb the animal.

On climate change:
Cold spell is effect of global warming.
A former senior scientific officer at the Hong Kong Observatory, Eddy Lee, said on Monday that the extreme cold weather affecting the territory and other parts of the world was a result of worsening global warming.

On energy:
Shop fridges waste energy enough for 7,600 homes.
WWF estimated that there are altogether 18,000 door-less fridges being used in retail stores. Fridges with doors, it said, can cut up to 40 percent of energy consumption.

On food safety:
Loophole sparks concern over online sales of high-risk food.
The new regulations require companies that have no physical stores to apply for licenses and register their suppliers and their warehouses for inspection purposes. However, online sales of certain products such as sandwiches, cookies and cakes are exempt from the requirement.

On nature conservation:
Hong Kong’s key reef area being wiped out
A think tank says sea urchins have been attracted to the Hoi Ha Wan Marine Park by increased algae levels, which are linked to development in the surrounding Pak Sha O River Valley.

On pollution:
Cyclists frustrated by Government’s bike blindness
A cyclist was arrested by the police in August 2014 for riding his solar-powered bicycle on a road in Kwun Tong. He was fined HK$3,000 for driving an unregistered vehicle and had his driver’s license suspended for a year.

On waste:
Volunteers clean up Tung Lung beach despite cold snap
More than 40 volunteers braved the extremely cold weather to clean up a beach on Tung Lung Island over the weekend. The beach that was filled with rubbish is not accessible by road and team members had to abseil down a slope one by one to reach the target.