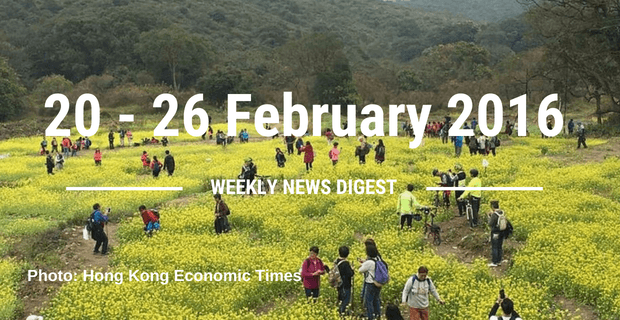 On animal welfare:
Ocean Park faces questions as two seals die within a week
Hung Ka-yiu, president of the Hong Kong Dolphin Conservation Society, said the latest incidents are surprising. It is unacceptable that an animal died from anesthesia, he said, adding that the veterinarians should have been aware of the correct dosage to be administered.

On food safety:
Aussie eggs scrutinized for toxic additives
The Centre for Food Safety has moved to allay local fears that Australian eggs on sale here may have been injected with toxic food dyes intended to make the yolks appear brighter. Strong dosages of chemical food dye additives are believed to increase the risk of cancer and their sale is banned here.

On land development:
Lantau’s Yi O development plan raises ecological damage fears
The Lantau Development Advisory Committee has proposed the construction of facilities in Yi O that will allow tourists to experience living in farms. A director of concern group Designing Hong Kong said construction of the hotel will likely put Yi O’s ecology at risk. The area is a known habitat of several endangered species including Romer’s tree frogs and horseshoe crabs.

On nature conservation:
Environment alliance raises concerns over new Lantau driving scheme
Tse Sai-kit, spokesperson of the Save Lantau Alliance, said that stray cattle and buffalo are common in the southern parts of Lantau Island, and drivers unfamiliar with the roads may accidentally run the animals over.

On waste:
Hong Kong hospital turns food waste into plant food
Kowloon Hospital is the first public hospital to irrigate plants with liquid fertiliser converted from food waste. The hospital handles 400 to 500 kilograms of food waste every day, including those from the nearby Eye Hospital and Buddhist Hospital.

On wildlife conservation:
Hong Kong steps up battle against illegal ivory trade: Government to push for import/export ban and sets timeline for end of ‘legal’ sales
The Government aims to submit a bill to kick-start efforts to outlaw the local ivory trade this year, and insists it was not stalling, contrary to concerns voiced by lawmakers and wildlife campaigners.