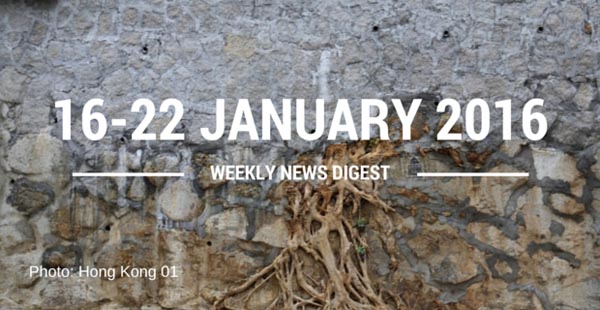 On wildlife conservation:
Dolphins could vanish before a marine park is established.
Samuel Hung Ka-yiu, chairman of Hong Kong Dolphin Conservation Society, said only one dolphin was spotted in northern Lantau waters last year, adding that the decrease in the number of dolphins in nearby waters have thrice gone beyond environmental impact assessment limits.

On animals:
Hong Kong’s urban sprawl blamed for wild boars straying into the urban jungle.
Last week a wild pig was found wandering outside the Conrad International Hotel in Admiralty before escaping into the wilderness. Another, possibly the same one, was spotted two days later in nearby Hong Kong Park, Mid-Levels. This time it was tranquilized and returned to the wild.

‘Doga’ record attempted in Hong Kong.
A new world record for the biggest dog yoga class was attempted this weekend in Stanley, Hong Kong, with 270 pairs of dogs and their owners practicing the moves for just over half an hour. The record breaking attempt is yet to be confirmed by the Guinness World Records but organisers were confident the record had been broken.

On land development:
Developers to benefit as the Government rezones village land.
The Planning Department expanded the village-type development zone in Pak Sha O, Sai Kung, by 140 percent in its zoning plans issued last month. The extra land could be used to build 29 “small houses” under the New Territories Small House Policy. Roy Ng Hei-man, assistant campaign manager at the Conservancy Association, suggested that the Government’s latest planning proposal was tailor-made for developers to maximize their economic benefits.

Hong Kong green activist given court go-ahead to challenge dumping of waste at Lantau wetland site.
Rubble dumped on land in Pui O, Lantau has annoyed local residents and villagers for years. It therefore came as a pleasant surprise for them when the High Court gave the go-ahead for a judicial challenge against the environmental authorities for allowing such dumping on the wetlands.

Manipulation of Small House Policy for profit.
A long-serving Hong Kong village supremo and his son and successor allegedly profited as much as HK$120 million from residential projects developed under the New Territories Small House Policy in the 1990s.

Small House Policy is a burden on villagers.
A rural leader told a radio programme that people elsewhere in the world can apply to build a house so long as they have the money and land. They are not subjected to restrictions similar to those stated in the Small House Policy.

Recycling could be hit if New Territories developed too quickly.
The Undersecretary for Development, Eric Ma, has warned that large-scale development of so-called ‘brownfield sites’ in the New Territories would hurt the recycling industry, and a phased approach is needed.

Paul Chan defends Tai Po land sale move.
The selling of a greenbelt site in Tai Po is under judicial review. But the Government has continued with the tendering exercise for the site, though it has pushed back the date when its ends.

Public should not draw a line over development.
A member of the Lantau Development Advisory Committee, Andrew Lam, said on Monday that he hopes to hear more views during a public consultation on how to develop the island.

On nature conservation:
Government slammed for ‘ugly facelift’ at Bonham Road stone wall.
The Highways Department’s use of cement to cover traces of the tree roots sparked controversy. The move has been criticised as it gives the impression that the Government wants to erase the public’s memory of the Banyan trees It also shows that the Government lacks the will to protect the city’s heritage trees.

On water safety:
Lead in water 30% over safety standards at Urban Renewal Authority’s first subsidised flats
Local newspaper Apple Daily conducted a test on water samples from De Novo, which is located in Kai Tak to the west of Tak Long Estate. Among the four samples sent to a Government-accredited laboratory, one sample had 13 micrograms of lead per litre, which is 30 percent over the World Health Organisation standard of 10 micrograms per litre. Another sample had f 9 micrograms of lead per litre.

Government press release:
LCQ13: Use of antibiotics in food animals for human consumption