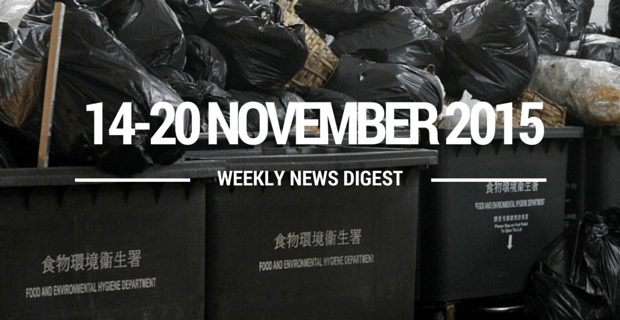 Commentary of the week:

Hong Kong’s recycling system is remarkably underdeveloped for a city of its size and relative wealth.
In 2013, for example, our population generated 9,547 tonnes of municipal solid waste daily but only 37 percent of this was recycled, according to the Environmental Protection Department.

Next week, look for our blog on this subject. Much of our waste is plastic and, sadly, significant quantities end up in our ocean. Plastic has been found in over 700 species, including 90% of all seabird species, and has thus made its way into our food chain. Plastic pollution adds more pressure to already depleted fish stocks and endangered marine life, including horseshoe crabs (see below).

Consuming sustainable seafood is more important than ever if we are to protect our fisheries. Hong Kong restaurant, Fishful Season, is hosting a sustainable seafood event, where you’ll be able to learn about sustainability while seeing how their seafood dishes are made (see below for details).

Fish aren’t alone in feeling pressure from our over-consumption. The ivory trade is still a major problem with smuggling still ongoing. A few days ago, 15kg of smuggled ivory was apprehended at Hong Kong International Airport. Those involved were fined just HK$65,000. In another case, a woman was fined HK$90,000 for smuggling 44kg of ivory. These stories illustrate the critical need for a ban on the ivory trade.

Tomorrow (Saturday) will see a march through Hong Kong of wildlife conservation groups, led by a Maasai tribesman, calling for a ban on the ivory trade. For more details and information on how to join, please see below.

Although Hongkongers increasingly support the ivory ban, they are actually quite divided on the subject of housing. There was outcry last week following a proposal to turn our country parks into housing, although some people voiced the opinion (see below) that there is no shortage of land. It’s essentially a toss-up between having untouched park land, or using this resource to provide much-needed housing for young people who cannot afford to buy flats.

This is an ongoing debate that will most likely remain centre stage over the coming weeks and months. For more on this, please refer to last week’s news commentary.

The following are the main environment/animal welfare-related stories covered by Hong Kong’s Press for the week 14-20 November.

On animal welfare:
Man shoots stray dog with crossbow in Tsz Wan Shan
A stray dog was in stable condition at a clinic on 17 November, after animal volunteers suspected it had been shot by a projectile on a hillside in Wong Tai Sin.

A solution to the housing crisis