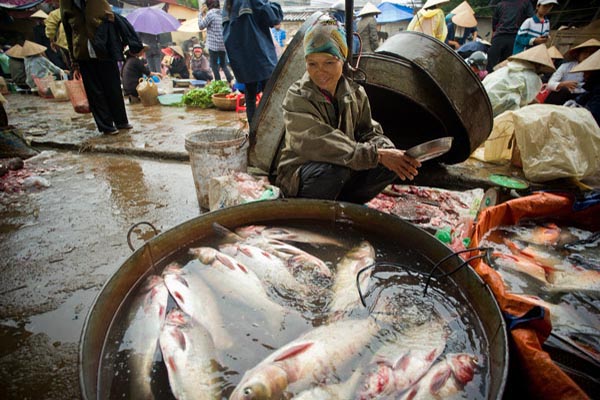 The victim on your plate: Fish have feelings

Throughout the ages, man has domesticated animals, whether for companionship as with dogs or for their usefulness as with horses. Mammals have been the main companion of choice over the years. We share an affinity with them – being mammals ourselves – and we tend to find them aesthetically pleasing. Perhaps most importantly, to varying extents we can communicate with them and more easily form emotional attachments.

But when you move to other animal groups, along the continuum away from humans, they are increasingly unlovable. Many people might class insects and arachnids as the lowest of the low, but what about fish?

Fish have always been viewed more as a resource than anything else. They have been a vital part of many cultures’ diets – fish is the main source of protein for 3 billion of the world’s population – so they are predominantly viewed as food. The idea of a fish being beautiful was only introduced as recently as the 1850s when the world’s first aquarium was built in London Zoo.

Even now though, I still know of many people who’d look into the tank, mouths watering, detailing exactly how they’d cook each fish.
How fish are perceived plays a significant role in their death. Seeing dead fish is not uncommon and in places like Hong Kong, there are many restaurants in which you choose a live fish to be slaughtered and cooked for you.

But no one thinks twice about this because fish are just food. In fact, fish are one of the very few animals that it is socially acceptable to serve whole: head, eyeballs and all.

Would the discovery that fish have feelings change anything? Dolphins once revolutionised how we see marine creatures by showing they recognise themselves in a mirror. Well fish can do this too. Manta rays look like they’re even enjoying themselves playing up to their reflection.

Fish are also surprisingly social, showing individual recognition even between different species. When hunting, they invite their friends to join the fray, and sometimes they just want a bit of love and attention. Any diver will testify to the fact that large garoupas, Humphead Wrasses and the occasional moray eel will come looking for a cuddle.

Fish have also been shown to feel pain. Though they don’t scream or squeal like many animals do, they exhibit unmistakable signs of being in agony. In fact, given pain is an evolutionary response designed to help an individual survive, it would be surprising if they didn’t feel pain.

Bearing this in mind, the welfare of fish is, quite frankly, downright disturbing by the time they reach seafood markets. In Hong Kong’s wet markets, for example, fish are routinely kept alive on platters and surfaces for display, with no water, while they suffocate; their gills collapse and they die from reduced oxygen intake.

Some are chopped through the middle and left to die slowly. The time to death obviously depends on temperature and moisture, but the European Food and Safety Authority has reported that death may take minutes, and in some cases, hours. Sadly, there are very few organisations campaigning for the welfare of fish so these practices are unlikely to change anytime soon.

Eating a fish without knowing how or where it was caught or raised is a risk for health and environmental reasons, but it’s also a risk if you’re an animal lover. Many fishing practices, e.g. trawling, are incredibly stressful for fish and putting myself in their shoes, so to speak, sound downright terrifying.

Sustainable seafood generally refers to practices that minimise harm to the environment and populations that are vulnerable to extinction. Although not all sustainable seafood takes animal welfare into account, there are some labels (e.g. BAP and Naturland) to look out for that include this in their certifying criteria.

BAP (Best Aquaculture Practices) ensures measures are in place to reduce stress to farmed fish, e.g. having aerial nets to stop diving birds attacking, and that strict aquatic animal husbandry practices are followed in accordance with the advice of organisations like the RSPCA.

Naturland has developed its own system of animal welfare control to focus not just on parameters such as space per fish and type of feed, but to provide a guarantee that their animals have a “good life”.

Next time you’re out shopping, look out for these, or if dining out, ask your waiter. Every restaurant should know their menu’s sustainability status. Never forget that fish are a lot more like humans than you would think and as such, deserve to be treated with respect.

For more information, please visit our site chooserighttoday.org.
ADM Foundation is a Hong Kong-based foundation that works toward solutions to key environmental challenges in Asia.