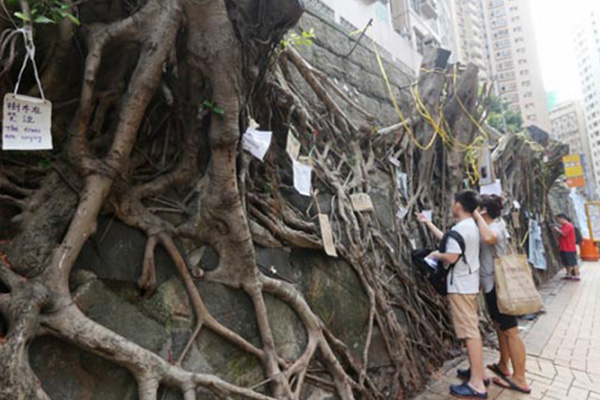 Stop cutting down stonewall trees! Time for a Tree Bill

According to a recent news report, the Highway Department (HyD)carried out maintenance works on the famous stonewall Banyan trees on Bonham Road, causing the public both to complain that the wall now looks ugly and to worry about the fate of the four trees that are growing back. The trees were cut down by the Government after two collapsed during heavy rain last year. The Government’s action caused a public outrage because the responsible department didn’t assess the condition of the trees nor inform the public. It seems the trees were cut down because they were growing on a poorly maintained structure rather than because they were in poor condition and thus unsafe.

Although the recent wall maintenance works didn’t affect what  remains of the four trees, according to the Highways Department, the roots will be removed if large scale wall maintenance works should take place in the future. So does this mean that the removal of the remaining roots is only a matter of time, even if they are healthy?

Why worry about a few trees? As of today, there are more than 1,200 stonewall trees growing on around 500 stone walls in Hong Kong, most of them are century-old. These trees serve as natural green canopies and improve the local air quality. They also enhance local biodiversity by providing a refuge for many birds and insects. Ideally, the Government should aim to maintain both the structure of the stone walls and the health of these trees in Hong Kong. Sadly, although there are in fact about 40 ordinances protecting trees in Hong Kong,  stonewall trees aren’t included.

Since 2010, Central & Western District Councillor Ted Hui has been lobbying the Government fora Tree Bill to properly conserve Hong Kong’s stonewall trees. The  bill will also notably protect Hong Kong citizens from potential hazards caused by unhealthy/ falling trees. Hui believes it will ensure the responsible government departments maintain the health of trees and conserve them for future generations. With the bill in place, the Government must protect all trees in both the countryside and urban area, including stonewall trees. If the Government violates the bill e.g. axing trees without proper assessment nor communicating to the public, the public can take the Government to court. According to Hui, the Government’s response to his proposal on a Tree Bill was that they’re open.

Whilst a bill is a must, we hope the Government will also list all stonewall trees in the Register of Old and Valuable Trees so that they can be properly managed and looked after. It would  be a great loss for the public if these invaluable and historic  trees  are cut down  when in fact they  should be  conserved by the Government.