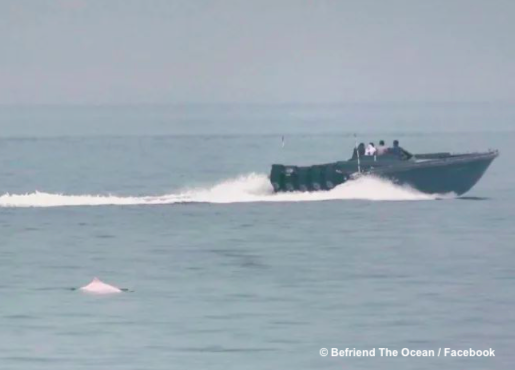 35 brownfield sites in the New Territories were found to have been involved in illegal storage and handling of recycled waste. “Waste mountains” were found in some recycling sites in Yuen Long which possibly involved unauthorised development and unlawful occupation of government land. These lands are in close proximity to the residential area. Public health and the environment are likely to have been affected by air and noise pollution. Greenpeace East Asia urges the government to take prompt action against illegal activities and resume the brownfield sites for public use such as housing development. [More details]

Since last year, many smuggling speedboats have frequently gathered near Sha Chau and Lung Kwu Chau Marine Park, north of Hong Kong-Zuhai-Macau Bridge (HZMB). In recent months, the fleet has moved to the waters off Tai O, south of HZMB, an important habitat for the Chinese White Dolphins. Conservationists have said the dolphins could get hurt and disturbed by the propellers in close proximity and the noise created by the illegal speedboats. [More details]

The population of Chinese White Dolphins in Hong Kong waters has dropped about 80% in the past 17 years. About 46% of dolphin calves haven’t survived beyond 2 years in the last two decades. Dolphin occurrence in north Lantau waters has been severely reduced compared to the previous decade and they are showing no signs of recovery. [More details]  [Full Report – Monitoring of Marine Mammals in Hong Kong Waters (2020-21)]

Bags of recycled styrofoam fruit wrapper was disposed of at the refuse station by Green@Tin Hau, a recycling store under Green@Community operated by 121C Society For Recycling. The operator apologised and clarified the disposal was due to street obstruction concerns; they will be penalised for their non-compliance. [More details]

6.【 South Lantau’s watershed is at risk】

The watershed habitat in South Lantau has not had sufficient protection. For example the lands outside Lantau South Country Park are not protected under the Town Planning Ordinance (Cap. 131). Illegal dumping of construction waste has also not been controlled under the Waste Disposal Ordinance (Cap. 354). About 37% of habitat on non-developed conservation-related lands are at risk of being destroyed by eco-vandalism and undesirable development. [More details]  [Full Report]

A shipment of 3,493 shark fins, equivalent to about 1,000 sharks, destined for Hong Kong was seized by Colombian authorities in late September. [More details] https://bit.ly/3zK6XtT