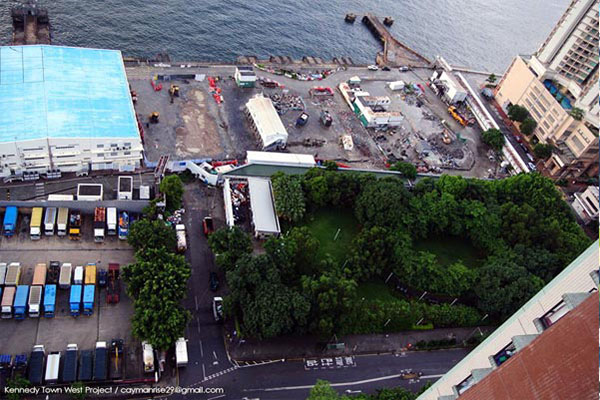 Recently, the Town Planning Board announced amendments to the draft of the Kennedy Town and Mount Davis Outline Zoning Plan (OZP) No. S/H1/18. The draft includes the rezoning of the use of pieces of land along Victoria Road and Ka Wai Man Road from ‘community’ / ‘greenbelt’ to ‘residential’, meaning an increase of 3,300 (1000 private and 2,300 public) residential flats. In addition, the Board suggested rezoning the land along the waterfront as ‘open space’ for future waterfront development.

If the amendments and development take place, it will mean demolishing the lovely Cadogan Street Park – an open green space that has been serving Kennedy Town residents for 18 years. The Concern Group for Protecting Kennedy Town (the “Group”) has been complaining that the Hong Kong Government is ‘robbing’ the park and they have spoken about the unfair procedure of the decontamination works that the Government is undertaking. As the complaints have fallen on deaf ears, the Group is introducing a land use plan for the Government in hopes of keeping the park.

Key features of the Groups’ rebuilding proposal:
1. Conserve the Cadogan Street Temporary Park and make it permanent to link up with the future promenade to lead residents to the harbourfront seamlessly.
Extend Cadogan Street Temporary Park & the pet park to Sai See Street for more green space.
Maintain proposed primary school as per the Plan.
Remove the commercial facilities in the promenade area to ensure it is a genuine recreational space for everyone.
If commercial facilities are required, keep them minimal, such as snack food counters, and put them between the new promenade and Cadogan Street Park as a buffer to serve people on both sides.

2. Ka Wai Man Road’s ex-Police Married Quarters and Hong Kong Academy site
Develop it as community facilities such as a community hall, public library, or public elderly home as a buffer to serve existing residents on the east side and the new residents on the west side.

3. Redevelop Sai Wan Estate (Phase 2) to increase the housing units from 600 to 1,000 (Phase 1 is to build the new public housing at Victoria Road so that Sai Wan Estate residents can be relocated in the same district).

4. The amount of meaningful open space per resident (e.g. flat grass park, accessible by the elderly and people in rehabilitation) within the Plan should reach 2sqm for both existing and new residents, not just the new residents.

The effect of this proposal is to reduce the total number of new housing units from 3,300 to 2,700 (down 18% and all from private housing), while increasing the meaningful and quality green area and community facilities.

Sign our petition now to support the rebuilding of Kennedy Town.