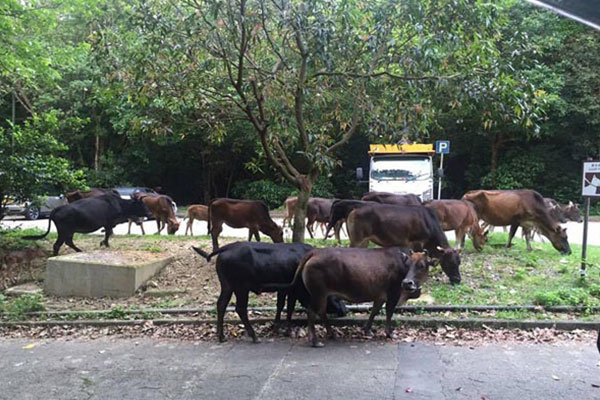 Progress of the installation of the cattle grid

In April, three local concern groups: Sai Kung Cattle Angel, Sai Kung Buffalo Watch, and Friends of Sai Kung, launched a petition to request the installation of ‘cattle grids’ to protect the lives of feral cattle. The petition has been a great success whereby a total of 1275 signatures were collected.

Furthermore, after a meeting with all the concerned government departments, most of them are finally in agreement for the cattle grid. AFCD have been given 6 months to complete design work of the cattle grid and figure out the logistics before the next meeting. All departments, NGO’s and designers are factoring in the concerns of road users including cyclists and drivers.

However, AFCD and the Transport Department have expressed their worries towards the plan and consulted have referenced ideas from other related departments. According to the Oriental Daily, AFCD is worried that pedestrians and bicycle users might fall between the gaps resulting in injuries. For the Transport department, they are concerned that the cattle grids might not be able to bear the weight of the vehicles.

Sai Kung Buffalo Watch’s representative, the petition organizer, stated that she understood the above concerns. She also mentioned their organization is willing to promote the public education campaign for people to know more about the cattle grid. Measures should be implemented to prevent accidents from happening again. Otherwise, the cows will continue to die and drivers will be at risk. Regarding the concerns from the Transport Department, there will be a Load testing at the AFCD cow farm with the water works department trucks, which are the largest heavy vehicles being loaned to AFCD for testing.

After most of the government departments are in agreement for the need of the cattle grid, it is a big step towards the actual plan to install the grid. We hope that the plan will be implemented soon to protect the lives of the feral cattle and the safety of the drivers and pedestrians.