5032 Signatures Obtained, This Campaign Was Victorious! 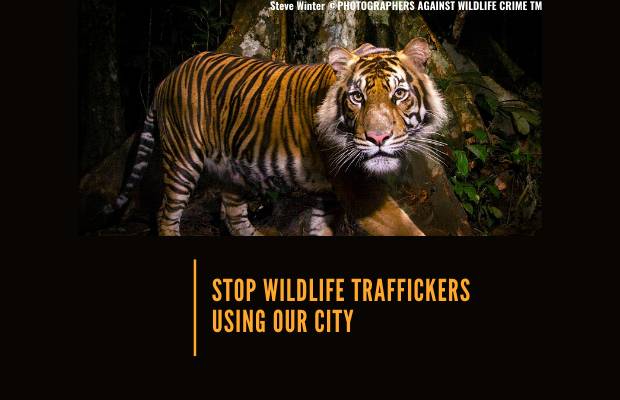 Wildlife crimes are ORGANIZED, and SERIOUS

BREAKING: Hong Kong’s lawmakers have voted in favour of tackling wildlife crimes as the serious and organised crimes they truly are!!

Wildlife crime poses an immense challenge to the international community. By taking this bold move, Hong Kong is not only showing global leadership, but is signaling that we will no longer stand by and let wildlife traffickers exploit our city, devastate wildlife populations and steal natural resources that impact local communities and national economies worldwide.

LegCo is about to proceed the debate of Second Hearing and the Third Hearing of the Organized and Serious Crimes (Amendment) Bill 2021.

On 18 Aug 2021, the LegCo will proceed to the debate of the Second Reading, consideration by committee of the whole Council and Third Reading for Organized and Serious Crimes (Amendment) Bill 2021.

If successful, it will bring certain wildlife crime offences such as trafficking into the Organised and Serious Crimes Ordinance (Cap.455). Most importantly, this will empower and provide a clear mandate for local enforcement to deter, detect, disrupt and dismantle the criminal networks exploiting our City. There are just a few days left to sign the petition and help us fight against illegal wildlife trade.

The first and second hearing of the Organized and Serious Crimes (Amendment) Bill 2021 was heard by the LegCo.

Debate on the second reading is to be adjourned. The bill is to amend the Organized and Serious Crimes Ordinance (OSCO) to add certain offences under the Protection of Endangered Species of Animals and Plants Ordinance to Schedule 1 to the OSCO.

The petition end date is extended to 31st Oct

Walls being painted across Hong Kong by local street artists, highlighted the species traded into the city and the scale of the problem. The Walls include Augmented Reality Elements to bring them to life. Stay tuned for more updates.

After a discussion within the Panel on Environmental Affairs, the Bill (which will allow wildlife crimes to be investigated as Organised and Serious Crimes) is moving forward unimpeded. No substantive opposition in the council. Timeline currently unclear, but could be within next few months.

We, the undersigned, express our support to the Hong Kong Government to make the necessary legislative amendments to treat wildlife crimes under Cap. 455, The Organized and Serious Crimes Ordinance (“OSCO”).

Hong Kong has been identified as a significant hub for trafficking of wildlife, mainly ascertained through the significant volume and number of seizures of wildlife, which is disproportionate when compared to other countries in the region. Through documented prosecutions, indictments and sanctions overseas, as well as international investigations and reports from the media, Hong Kong has also been repeatedly identified as a hub for organized wildlife crime.

There is a tendency to believe that smuggled wildlife is just ‘in transit’, presumably to mainland China, thereby minimizing Hong Kong’s culpability and responsibility. We argue that Hong Kong is a hub, and that wildlife crimes are organized and serious crimes that should be addressed as a priority.

Hong Kong is clearly favoured by ‘professional’ (as opposed to inexperienced or unwitting) traffickers in some of the most valuable and prolifically traded commodities in the world, including rhino horns, pangolins, valuable wood products and European eels.  Persons or entities / businesses involved in the crimes prosecuted locally, have been based in Hong Kong and their presence here integral to the commission of the crime.

Despite Kong Kong’s relatively small size, its position as the world’s leading air cargo hub, 8th largest container port and 4th busiest international passenger airport, as well as its close proximity to key demand centres for wildlife products, mean that wildlife trafficking into and through the city is effectively contributing to the global extinction crisis, and disproportionately so.  It is lining the pockets of criminal syndicates and transnational trafficking networks who use our city’s key infrastructure for illegal activities.

Based on publicly available seizure data, syndicates and individual traffickers from at least 60 countries / territories (nearly a third of the world’s countries) have smuggled endangered and regulated wildlife into Hong Kong, ranging from rhino horn to live otters, since 2013.

“Seriousness” is indicated by the commodity trafficked, including its level of conservation threat or endangerment and its value on the illicit market.

The illegal wildlife trade is a lucrative business, and has been ranked alongside narcotics, arms and human trafficking by institutions such as Interpol, the World Customs Organization and UNODC. A review of 528 seizure cases from January 2013 to December 2019 indicate that hundreds of  species of rare and endangered wildlife are being illegally traded in Hong Kong [i]. Endangered wildlife seized in the last 7 years has been valued at over HK$767 million [ii], but like many crimes, these seizures are likely the tip of the iceberg and the true figure significantly higher, especially as government estimates can be conservative [iii].

Current enforcement measures are NOT ENOUGH

In 2018, Hong Kong took significant steps, by phasing out the domestic ivory trade, introducing indictable offences and raising penalties to a maximum of 10 years imprisonment for smuggling and illegal trading of endangered species. The Hong Kong Government affirmed that the amendments made to the Protection of Endangered Species of Animals and Plants Ordinance (Cap. 586) on 1st May 2018 were to “provide a strong deterrent against illicit wildlife trade and to show that the Government is very serious about deterring these crimes”. [iv]

Although the amendments to Cap. 586 have been in place for over two years, Hong Kong remains a major hub for wildlife trafficking. Seizure volumes continue to be large and amongst some of the highest in the world, and in some instances are increasing.  Hong Kong has recorded 6 record-breaking seizure cases in just the past 2 years. Volumes are further likely underestimated given the sheer volume of the trade and inspection customs capacity.

Following the increase in penalties, some harsher sentencing for wildlife crime has been observed, but the bar previously set was low and even now these sentences still remain far below the maximum permitted. As seizures continue at pace, it is clear that the desired deterrence effect is not being achieved.

Worryingly, prosecutions of large volume seizures remain rare with cases often dropped by Hong Kong authorities due to a lack of evidence. No individuals or organizations have been prosecuted for some of the Hong Kong’s record-breaking seizures including: the city’s largest seizures of pangolins (comprising 8.3MT of pangolins with 2.1MT of ivory in 2019) and the largest seizure of ivory (comprising 7.2MT of ivory in 2017).

NEARLY ALL those prosecuted in Hong Kong were carriers or ‘mules’

Currently, the Agriculture and Fisheries and Conservation Department (AFCD) and not Customs and Excise Department (C&ED) or the Hong Kong Police Force (HKPF) investigate the vast majority of wildlife trafficking cases, despite AFCD officers having limited training and powers to do so safely and effectively. Instead of investigating and prosecuting the organized networks and criminal syndicates involved in these crimes, those prosecuted in Hong Kong are predominantly carriers or low level ‘mules’, typically caught red-handed at the airport or other border control points.

An enhanced enforcement strategy is needed

Recognizing wildlife crime as a form of organized crime provides a number of significant benefits in terms of tackling the problem nationally and contributing to international efforts to address this burgeoning threat. Accurate identification of crime threats helps to ensure that appropriate enforcement and criminal justice resources are applied. In most cases that would be the police, given the wealth of resources and specialist units available to them. Matching the problem to the solution more accurately is also more efficient than over-burdening a less-equipped agency that may struggle to meet evidential requirements sufficient to support a prosecution. Hong Kong urgently needs an enhanced enforcement strategy that goes well beyond the status quo.

Ultimately, accepting wildlife crime as a form of organized and serious crime would be beneficial to enforcement agencies, and lead to a deterrent effect against offenders, targeting the profits they aim to gain.

We therefore urge the government to bring Wildlife Crimes under Cap. 455, The Organized and Serious Crimes Ordinance, so that enforcement authorities can use all the prosecutorial powers available under Hong Kong Laws. This Ordinance is aimed at tackling the growth of organized and serious crimes in Hong Kong, and to improve the ability to investigate and prosecute by providing for a combination of enforcement and deterrent methods, including:

This petition was started by ADMCF, Bloom, Hong Kong Shark Foundation and WildAid on November 19, 2020, with an end date of October 31, 2021.