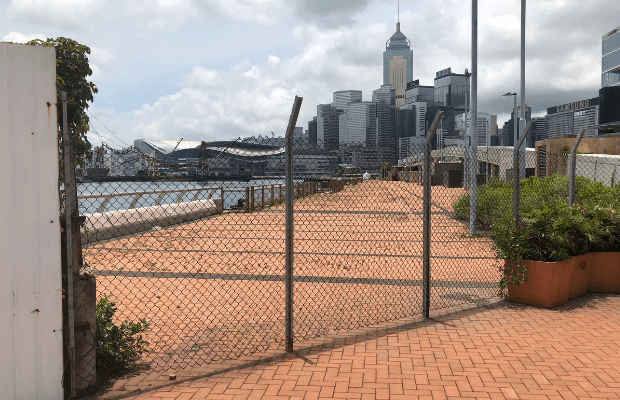 1. Your Petitioners are individuals and organisations in Hong Kong that are deeply concerned over the future access and use of the Central Harbourfront of Hong Kong, and how the enjoyment by the Public would be impeded should jurisdiction over the entire Site be transferred permanently to the Garrison for use as a military dock.

2. The Hong Kong Government has consistently promised to provide and manage a continuous waterfront promenade along Victoria Harbour open to the public, with provision for a berth along the waterfront edge of the Site:

b. Planning for “co-existence” of the CMD and the public; use of the promenade “the general public will not be affected by the existence of the military dock … when the dock is not in use … most of the time…on normal days” “The question of discussing with the PLA Hong Kong Garrison afresh does not arise.” (Secretary for Development, Hansard 6 June 2007 at pp7776, 7777-7782 q.v.)

c. “The Administration would open up the berth for public use (when not in use by the PLA) as part of the waterfront promenade”; minute §4.3: “a 2-kilometre continuous promenade and a 11-hectare (ha) public open space” (Harbourfront Enhancement Committee 28th meeting, 17 Aug 2009: Secretary for Development (then Ms. Carrie Lam) with the Director of Planning and the Chief Town Planner for this area at minute §4.4(e))

d. “our planning intention … to open the area of the military dock to the public when it is not in military use”, describing this as a “commitment … reiterated …in 2007” and that “the military dock is a marine-related facility co-ordinated and implemented by the Government”. (Secretary for Development, “My Blog”, Development Bureau’s website, 21 April 2013)

3. In 2013, the Government caused the Planning Department to renege on these promises by replanning the Site and its uses, asking the Town Planning Board to rezone it solely for military use with no protection for the public’s right of access.

4. The Town Planning Board ignored the 19,029 representations and comments from the public opposing this plan and decided on 14 February 2014 not to amend its draft plan S/H24/8 which re-zoned the Site from ‘Open Space’ to exclusively ‘Military Use’ (“OU(MU)1”). These are the results:

a. The amendments changed the physical size, nature and use from a line along the waterfront for the “berthing of military vessels” as required by the Defence Land Agreement to 3,000 square metres of public open space and harbourfront promenade zoned for “permanent military use”.

b. There are no other, specific uses in Column 1 and Column 2 of the Notes to the Plan. Therefore, there can be no other use of the Site.

d. The Site is surrounded by a large public open space and this has serious implications for the enforcement of Hong Kong law, and public enjoyment of that large open space.

e. The management of the entire Site becomes permanently a Military right and responsibility, and any agreement on the use of the Site for public passage and recreation when not in use is likely to be unenforceable under the Basic Law.

5. The Planning Department also put to the Board and it decided to revise paragraph 8.5(a) of the Explanatory Statement of the Outline Zoning Plan S/H24/8 to include “The Garrison has, on the request of the HKSAR Government, agreed in 2000 that it would open the area of the military dock site to the public as a part of the promenade when it is not in military use, having regard to its operation and need for protecting the military dock.” However:

a. This agreement was and is unascertained and unknown. Until the publication of Outline Zoning Plan S/H24/8 in 2013, all zoning and urban design plans showed the area as Public Open Space.

b. The text of any agreement or ‘undertaking’ by the PLA has never been disclosed.

c. ‘When not in use’ is qualified by two matters that may deprive the public of any reasonable expectation of enjoyment of this central part of the Harbourfront Promenade: It would be the Garrison that would open the area to the public [not the Government, as DevB had promised to the Harbourfront Enhancement Committee on 17 August 2009 and the Harbourfront Commission on 2 March 2012]; and ‘Not in use’ would itself be decided, presumably, by the PLA, “having regard to its operation and [the] need for protecting the military dock”.

d. There are no terms in the Outline Zoning Plan stating explicitly that the site would be open to the public when it is not in military use. Thus there is no guarantee of public entry and usage in future.

e. The promises are too vague to be enforceable. Any promise by the PLA to allow the public use of the site for leisure purposes despite the rezoning has no legal force or effect. Once the Site is handed over to the PLA, neither the SAR Government nor the Town Planning Board will have any further control over it.

6. Designing Hong Kong Limited stepped forward to represent the public interest and challenge the decision of the Town Planning Board. The High Court granted leave for judicial review of the Board’s decision (HCAL No 49 of 2014) in July 2014. The High Court recognized that the case enjoyed a realistic prospect of success, i.e. that the Board’s decision may well have been unlawful, and that the application for review was to protect the public interest, and not for private or personal gain. Because Designing Hong Kong relies on public donations it could not afford to bring this case hence it found pro bono lawyers willing to help and applied for a ‘protective costs order’. However, the Courts decided not to grant protection because Designing Hong Kong was of the view that the Government does not have the right to seek costs against its supporters or to make them disclose private and personal finances. A subsequent attempt by Ms Loy Ho to join was denied and legal aid for her appeal was refused. As a result the case has never been ruled on by the Courts.

7. Now Government has ignored public disquiet and all its own previous promises that this site would be open to the public and managed by Government.

9. The Outline Zoning Plan S/H24/8 together with a schedule of the representations and comments were submitted to the Chief Executive in Council (CE in C) and on 22 January 2019. The CE in C approved the draft plan and on 1 February 2019, notification of the approval of the draft plan was gazetted.

To Chief Secretary For Administration,

Your Petitioner(s) therefore humbly request that the Chief Executive and the Chief Secretary accede to the following:

(a) To safeguard this piece of land for enjoyment by the public;

(b) To immediately open the site for public use;

(c) To retain ownership of the land and facilities (for example under the Government Property Agency);

(d) To manage the site as public open space (for example under the Leisure and Cultural Services Department);

(e) To clearly mark the boundary of the site;

(f) To allow the military use of the Site and facilities when a vessel is berthing alongside (as promised) (including for the preparation for such berthing); and

(g) To fully disclose the text of any and all related agreements or ‘undertakings’ by the PLA.

This petition was started by 中環海濱關注組 Central Harbourfront Concern Group on February 19, 2019, with an end date of May 30, 2019.