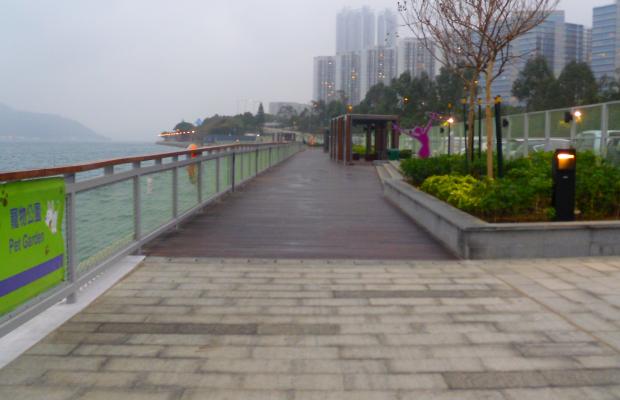 When Quarry Bay Promenade Park was opened in December of 2012, there was hope that the pet zone would become a new go-to place for dogs. However, although the waterfront park has always been very popular, the pet zone has received on-going criticism for its poor planning.

The current pet zone has limited space and restricts the movement of pets. It is easy for them to bump into runners and pedestrians. We recommend relocating the park to the nearby government site and turning the existing pet zone into a harbor promenade.

Furthermore, the pet zone is on Hoi Yu Street with an exit at both ends of the park (A and B). Gateway A allows pedestrians to enter Hoi Yu Street through Java Road. However, Gateway B leads either to the promenade park, where dogs are not allowed, or to a dead end (a car park entrance at the far end of Hoi Yu Street). As a result, most pet-owners (except for drivers) enter the park through gateway A and have to take the same route back after walking their dogs, which is very time-consuming. It is also contrary to the original intention of having one-way traffic.

The gateway B is closely linked to the Quarry Bay Park in Sai Wan Ho. To facilitate the traffic of pets and their owners, we recommend that the Department construct a pet passage at the waterfront, allowing owners to walk their dogs along the promenade of Sai Wan Ho waterfront and to enter the pet zone this way.