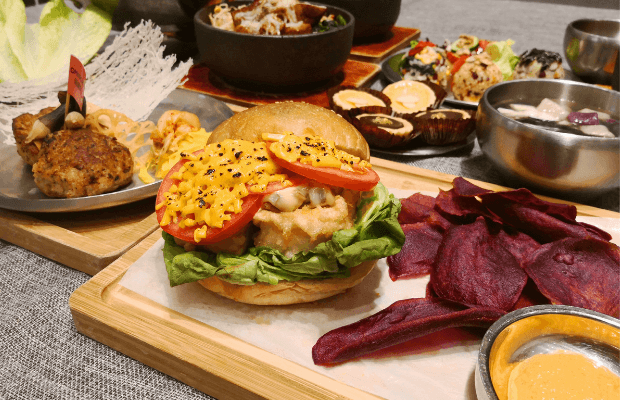 Plant-based diets can effectively lower the risk of chronic diseases as well as reduce carbon emissions and animal suffering.

To meet the market demand, we encourage and advise other eateries to introduce vegetarian options as soon as possible. Please sign to support!

The World Health Organization (WHO) has classified processed meat such as sausages, bacon and ham as Group 1 carcinogen, the level of harmfulness is equivalent to that of cigarettes, alcohol, arsenic, asbestos, etc. Red meat is also classified as Group 2 carcinogen – probably/ possibly carcinogenic. For the health of the general public, we encourage corporations including but not limited to Maxim’s, McDonald’s, KFC, Pizza Hut and Tai Hing to fulfill their corporate responsibilities by introducing vegetarian options.

The United Nations (UN) issued an ultimatum last year, stating that if the current speed of global warming persists, global temperatures will rise by 1.5 to 2 degrees Celsius compared to that prior to Industrial Revolution in 11 years the soonest, which will lead to irreversible crises such as rising of sea levels, severe windstorm and food shortage. Animal husbandry accounts for 14% of the global carbon emissions. Corporations share the responsibility for reducing meat consumption and carbon footprint, which shall be done in no time.

Looking at other places in the world: McDonald’s in Finland and Sweden introduced vegan hamburger McVegan back in 2017; IKEA also started to offer vegan hotdogs in all branches in Europe and the United States; two American food technology companies Beyond Meat and Impossible Foods have been awarded “Champions of the Earth” by the UN as a commendation for their contribution to carbon footprint reduction by inventing meat alternatives.

We hope that your company can offer vegetarian options and work hand in hand with fellow citizens to reduce meat consumption and carbon footprint for the sake of the planet.