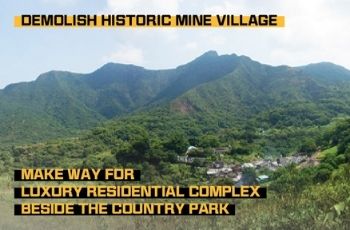 The government is proposing an area for luxury residential development in close proximity to Ma On Shan Country Park that is currently Green Belt. The cultural heritage of the Ma On Shan Tsuen area will very likely be destroyed if this goes ahead. The likely increase in population in Ma On Shan will also burden the existing limited supporting facilities and transportation system.

The Green Belt and traditional villages are treasured by Hong Kong people. However these are disappearing threaten by urban development plans. The approval of this rezoning plan will set a bad precedent of developing Green Belts in the future.

We request the government to withdraw this rezoning plan. We also call for your support so that the voice of Ma On Shan residents and that of the Hong Kong society can be heard. We, Hong Kong people, should speak up for our land and environment. Join us and protect Ma On Shan. Thank you all!

We, as the Hong Kong citizens, do not agree with the development of Green Belt and oppose the Ma On Shan Outline Zoning Plan No. S/MOS/23. We also urge the government to maintain the purposes of Green Belt as a buffering zone and for protecting the country parks. Our opinions are as follows:-

The government’s actions are found suspected of being injustice

The government did not consult the villagers and district councils before the gazette and thereafter only held a one-hour meeting. We suspect the government’s intension is to avoid the villagers so they cannot understand the full details for this rezoning plan. The government did not take the initiative to dispel public worries and provide sufficient time for public consultation which is of importance. This rezoning plan actually affect all Hong Kong citizens including the villagers, Ma On Shan residents and all country park users. Hence the government is found suspect of violating the procedural justice.

Twenty years ago, Sun Hung Kai Properties Limited purchased Wan Ka Village that is situated at the top of Ma On Shan mountain. The development of this land for low-density luxury houses was approved in 2005. The corresponding road improvement work was also approved in 2009 but the construction work was put on hold as the government intervened. The government has already taken over the road improvement projects. The government is thus suspected of transferring benefits and colluding with the developers.

Since 2002, Ma On Shan Village was listed as “cultural heritage” to which land development is prohibited. However, from the outline gazetted by the Town Planning Board in May 2009, Ma On Shan Village was removed from the list of cultural heritage without valid reason. The government’s intention and lack of transparency inevitably arouses public suspicion.

Relevant factors are not considered thoroughly

The increasing population density will burden the limited supporting facilities in Ma On Shan including the community and medical facilities. The transportation system in Ma On Shan has long been criticised. Traffic congestion is common. Further land development in Ma On Shan is very likely to intensify traffic issues causing inconvenience. Currently there are insufficient Trunk Roads connecting Ma On Shan to the city. Any congestion happens in either one of the Trunk Roads including A Kung Kok Street, Ma On Shan Highway, Tate’s Cairn Highway, Sai Sha Road and Shek Mun roundabout paralyses the traffic.

Both the Ma On Shan Tsuen Road and the roads to Cheung Muk Tau Village construction site need to be expanded and connected to new roads. Road expansion requires higher investment cost and time on construction especially for developing sewage systems and utility cables. However the general public doubt the effectiveness of making a big investment on infrastructures serving only a few private housing estates. Raising the question as to the likelihood of other housing supply projects in the short and medium term being slowed down.

Sacrifice the nature in favour of certain parties

All proposed site lies in the Green Belt. In comparison to previous cases, Item F and G are closer to the fringe area of Ma On Shan Country Park – just about ten meters away. The approval of rezoning plan will set a bad precedent of developing Green Belt, threatening the wildlife and woodland ecosystems of all country parks.

This rezoning plan does not align with the original purposes of Green Belt. It serves as a buffer zone between the urban area and natural environment and also protects the nature from encroachment by urban development. The approval of this rezoning plan is no difference from developing Green Belt. The wildlife and woodland ecosystems in Ma On Shan Country Park will thus be threatened by the increasing human activities during and after the development. The Green Belt can no longer protect the nature from human disturbance due to urban development.

The rezoning sites and road system are in close proximity to the Sites of Special Scientific Interest (SSSI) in Ma On Shan which is a shrubland nurturing a diverse range of species including uncommon ferns, rare orchids, barking deers (Common Muntjac), Chinese porcupines and wild boars. Thus the ecological and biological diversity of Ma On Shan will be threatened by the increase in human activity and pollutions. This does not seem to be consistent with Hong Kong’s commitments under the Convention on Biological Diversity of United Nation and Hong Kong Biodiversity Strategy and Action Plan and stated aims to strengthen Hong Kong’s Biodiversity.

Item G involves the demolishing of Ma On Shan Village which has retained the unique culture, history and landscape of the former mining village. The village holds 70 years of history and it is the only old mining site left in Hong Kong hence it has significant tangible historical value. Ma On Shan Village is a historic village cluster which consists of the Upper and Lower Ma On Shan Village and Shun Yee Sun Tsuen. If this rezoning plan proceeds, not only will the old village cluster be destroyed, some pillars of the Mineral Preparation Plant (a Grade 3 historic building) will also be demolished for road development in the future. The history of Hong Kong’s iron mine history will disappear and the integrity of Hong Kong’s history will be affected.

Ma On Shan mountain was associated with mining and explosives which might have weakened the natural geological structure. According to the rezoning plan, Item D and E are only 30 meters away from the historic site- 110ML mine. Since Cultural Heritage Impact Assessments for the historical sites on Ma On Shan mountain were rejected, there is a risk that the mine might collapse during the piling operation. The damage to our historic buildings is irreversible.

Land development is a controversial issue in Hong Kong. A consensus has been forged across Hong Kong society that the solution of housing crisis is to develop brownfields and preserve green areas, and to tackle problems at source. The government has again ignored public opinion.

We hereby reiterate our objection to Ma On Shan Outline Zoning Plan Draft No. S/MOS/23 due to the following reasons:-

We urge the government to comply with the public opinion and the principle of  “Develop the brownfields, conserve the nature”, to retain the proposed sites as Green Belt and to withdraw the rezoning plan. The Secretary for Development shall commit to his claim in 2019- “We will not seek for opportunity to change the land use of the fringe areas of country parks”. 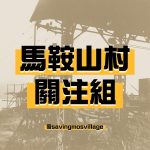 This petition was started by 馬鞍山村關注組 Ma On Shan Village Concern Group on December 9, 2020, with an end date of February 20, 2021.