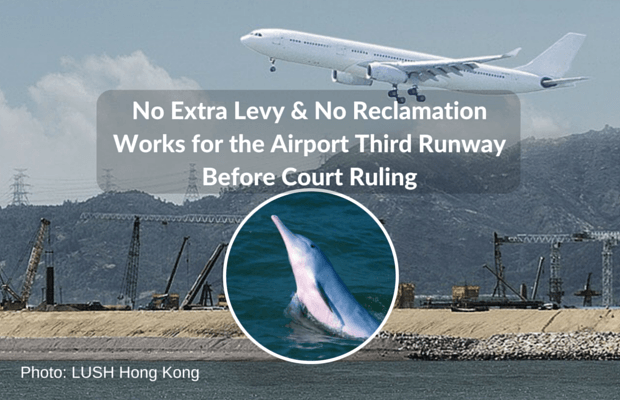 The Chief Executive of Hong Kong, Secretary for Transport and Housing, The Chairman of Airport Authority Hong Kong,

The Environmental Protection Department (EPD) granted approval to the most debatable Airport’s Third Runway Expansion Project without complying with the Environmental Impact Assessment Ordinance. As a result, Ms. Ho Loy, Lantau resident, filed a judicial review with an attempt to reverse the department’s decision and revoke the project’s environmental permit. The court hearing of the judicial review completed on July 8th, 2016, and the court ruling is expected to be released within a few months.

However, the Airport Authority Hong Kong (AAHK) decided to brush such legal process aside in order to impose a levy as an airport development fee on all passengers who depart from and transit through the Hong Kong International Airport, starting on August 1st this year. The AAHK also planned to commence the reclamation works on the same day despite the pending court ruling and the public opposition to such development project.

If the EPD and AAHK lose the judicial review case, the third runway expansion project would come to a halt. Butt he levy would already have been collected which is unfair to both Hong Kong and overseas travellers because the levy is non-refundable. Even worse, the reclamation works would bring permanent and irreversible impact to the marine environment, seriously threatening the Chinese White Dolphins – a wildlife icon in Hong Kong that had already been suffering from reclamation footprints. Such severe damages to both the environment and the public are unacceptable.

The Third Runway Expansion Project cost at least HKD141.5 billion, such an enormous bill will largely be paid by Hong Kong residents, whereas one-third to be covered by the airport development fee. To make matters worse, while the charged levy proposal and finance plan of the expansion project has not been approved by LegCo, the AAHK refused to set a defined period to charge the airport development fee. There’s no indication from the government as to when the Pearl River Delta Airspace issues will be resolved. Hence, the effectiveness of the infrastructure project remains a big question.

Please sign this petition to express your views to HKAA and the Hong Kong Government. Here we also make an appeal to all political parties in Hong Kong, including all candidates of the upcoming Legislative Council Election, to clearly express their firm stance of this important matter, and to support our two urgent requests.

To The Chief Executive of Hong Kong, Secretary for Transport and Housing, The Chairman of Airport Authority Hong Kong,

I the undersigned hereby request that before the final court ruling is made, and until the Third Runway Expansion Project is proved to be 100% legal, I plead to the Hong Kong Government and AAHK with two urgent requests: