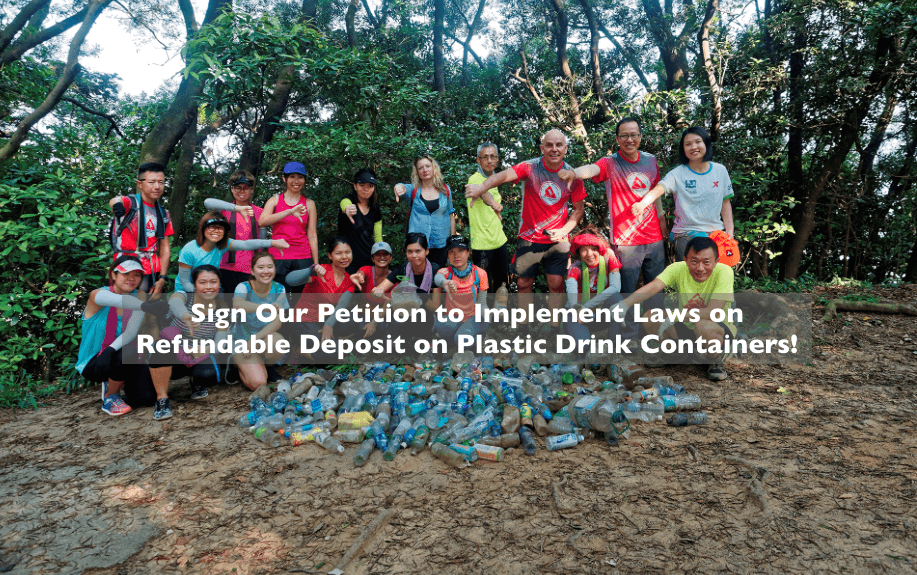 Hong Kong is a world city and global tourist destination. Hong Kong is becoming more widely known for its magnificent green belts and hiking trails. Yet Hong Kong is littered with discarded drink containers, in the streets, on the trails. Over 2,000 tonnes of plastic is dumped in Hong Kong each day (that’s 730,000 tonnes a year) and only 83,000 tonnes per year is recycled. That means more than 600,000 tonnes is added to landfill or the landscape every year. A Container Deposit Scheme will help to increase recycling and provide an income source for low income earners.

Hong Kong Hiking Meetup’s policy to minimise single use bottles on hikes has been eagerly adopted by its 17,000 members and demonstrated how the outdoors can be enjoyed with responsibility. Pacific Coffee in Hong Kong recently ran a lid refund program and managed to collect 6,000 lids through 30 stores in 1 month. Many groups volunteer their time cleaning coast lines. The public is ready.

The City of San Francisco has banned the sale of single use bottles under 21oz capacity. Ten states in the United States have container Deposit Schemes. In Australia, The State of South Australia has had deposit scheme in place for more than 3o years and was recently joined by the Northern Territory and New South Wales has announced legislation for 2017. At least 15 countries have active container deposit schemes including Canada, Sweden, Denmark and Fiji.

Some would say current recycling programs are enough – that a Container Deposit Scheme is not needed. But the facts speak for themselves, there is not enough recycling in Hong Kong. Coca Cola’s web site in Australia says the net cost to consumers is 1.35% increase in costs. If drink containers impose a cost on the environment those consuming them should pay for that. Others will claim that it is too difficult. However, with more than 15 countries operating schemes and some for over 30 years, Hong Kong with its high density is up to the challenge of becoming a smart city.

Cleaner Hong Kong – with higher recycling rates Hong Kong will be a cleaner place to live and visit.

Example of leadership in the region – Asia has the highest level of plastic waste in the world. This is an opportunity for Hong Kong to show leadership on an important issue in the Region.

I hereby undersigned, demand that the Government of Hong Kong urgently implements a compulsory refundable deposit scheme for all plastic drink containers in Hong Kong.

Hong Kong Hiking Meetup HKHM is probably the world's largest organised hiking group with over 23,000 registered members. We organise about 1,800 hikes a year average more than 4 hikes a day!

1) Hong Kong Hiking Meetup does not organise or discriminate based on age, gender or religious affiliations. We do discriminate based on clothing and fitness; people mustn't wear jeans or inappropriate shoes on our hikes. We reserve the right to exclude people based on less than optimal fitness, to protect the hiker in question from injury and / or other unforeseen circumstances. This allows other hikers to enjoy their journey as freely as their own fitness will allow.