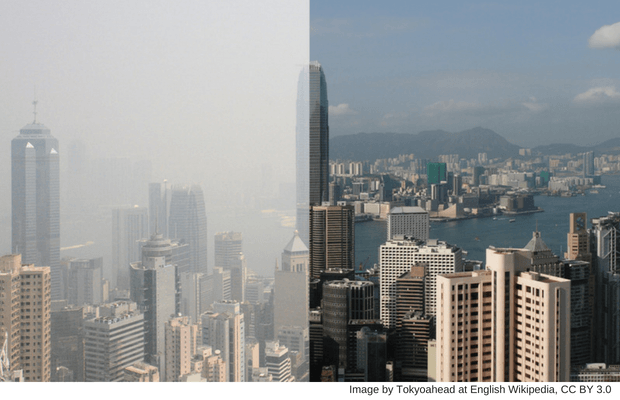 Director of Environmental Protection, Members of the Legislative Council,

Air pollution is the result of unsustainable human behavior that has ultimately affected the lifestyle and wellbeing of Hong Kongers. This is an issue that affects our health and future generation, which is why we must call attention and act upon this issue.

Air pollution kills 4.2 million people worldwide according to the WHO, which is more than half the population of Hong Kong. According to studies conducted by the HKU, increasing concentrations of particulate matter, an air pollutant, are associated with increased risk of emergency hospital admissions for pneumonia and is proven to reduce life expectancy.

We must achieve permanent change through the enforcement of laws and policies, which will ensure changes in the ways the public, private companies, and government branches will act towards the issue of air pollution.

To Director of Environmental Protection, Members of the Legislative Council,

We – students, parents, and citizens – strongly believe that air pollution has grown to be a serious health threat for not only young students but also the general public in Hong Kong. There have been many efforts to improve on this issue, but we believe that more extensive measures must take place to ensure a safe and healthy environment in Hong Kong.

Therefore, we call upon those in charge to act upon the pervasive issue of air pollution through implementing the following:

Air quality concentration goals for pollutants have not been set by the Hong Kong government in compliance with the WHO standards. This pollutant concentration goal will ensure clear progress to be made towards the wellbeing of the public.

MTR stations, bus stations, and major streets account for most of Hong Kong’s public transport, with millions of Hongkongers making trips back and forth. The public has the right to know about the air quality level in these frequently visited locations, as air pollution is regarded as a major health risk.

If two consecutive days are expected to exceed safe pollutant concentration levels, the Hong Kong government must provide free public transportation during commute hours. This system has been implemented in cities like Seoul, and will act to protect the public and call on for more immediate action on the issue.

According to the Hong Kong government, a pre-Euro 3 vehicle produces 7.5 to 34 times as much particulate matter than Euro 5 vehicles. A blanket ban on these vehicles will help reduce emission and lower pollutant concentration levels in Hong Kong.

Air quality reports with concentration levels of pollutants such as particulate matter, ozone, nitrous oxides, and sulfur oxides must be shown on daily news reports, similar to the weather report. This will help us understand daily health risks, allowing people to take necessary measures to protect themselves.

We strongly believe that the above stated will help combat air pollution in Hong Kong. These measures must be taken immediately to reduce the deadly accumulative effect of air pollution on the people of Hong Kong.

Project Matter is a student-led think tank founded in 2016.

We aim to make a breathable future through the power of research, awareness, and action.

Air pollution is a serious problem that affects people globally. When harmful substances such as particulate matter and nitrogen dioxide leave our factory chimneys and exhaust pipes, they enter our atmosphere and wait to be inhaled by the public. Vulnerable groups of the population, including students, are impacted by this problem disproportionately.

We work together with school leaders, NGOs, engineers, and the government sector in order to come up with solutions for air pollution. Through this, we aim to address the most fundamental problem of air pollution: a lack of awareness and action.