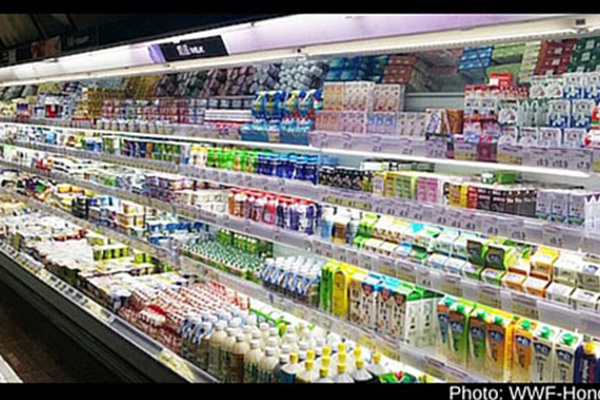 Have you ever noticed how cold it is in supermarkets when you go to buy any array of refrigerated products? The reason seems fairly obvious – open refrigerators. Doesn’t that strike you as odd? Think of the electricity cost if you left your fridge door open to cool your flat!

Looking at this very issue, WWF-Hong Kong recently conducted the city’s first-ever study on the energy efficiency of commercial open display refrigerators, where 640 stores of 26 retailers took part. Of the 8,500 refrigerators checked, less than half had doors, this means significant electricity wastage and unnecessary carbon emissions.

As a result, 70% of stores failed the assessment. WWF estimates that the absence of fridge doors contributes an additional 90 millions kWh of energy and 51,000 tonnes of unnecessary carbon emissions over a year.

How much is 51,000 tonnes of extra carbon emissions?  It’s equivalent to 10,000 round trips in business class from Hong Kong to London. While 90 millions kWh of electricity equals to the total energy consumption of 19,000 households per year in Hong Kong.

Among the many retailers who took part in the assessment, 7-Eleven found that stores with fridge doors had a 40 percent electricity saving when compared to those without. As a result 7-Eleven has pledged to install fridge doors in all its stores this year.

Another chain retailer 759, discovered that the items kept in fridges with door generated slightly better sales. They have agreed to conduct a fridge test and customer survey later this year, and to install fridge doors in all of its stores in the coming 3 years.

While it’s good news to have small chain stores like 7-Eleven and 759 pledging to tackle climate change. How about the big players, namely Dairy Farm and A.S. Watson Group who respectively own Wellcome and ParknShop, not to mention the other familiar names such as City’super, AEON, Marks & Spencer and so on.

The data shows that the stores owned by these two groups alone used energy that would equate to the  release of an additional 33,954 tonnes of carbon – nearly two times more than the amount of those owned by 11 other groups together. The big players are not just giants in the industry, they are also big contributors to global warming.

So, what do these giants do to tackle climate change? According to the A.S. Watson’s 2015 CSR report (page 30), their Energy Saving initiatives in-progress have been focusing on retail stores in both Asia (including Hong Kong) and Europe. The measures include LED light usage, reducing distribution of single-use plastic carrier bags and encouraging the use of more environmentally-friendly carrier bags. But they didn’t seem to realise that there was need to reduce energy consumption of doorless fridges before. But now they have done, as WWF-HK had provided them with the research findings, however, according to WWF, the Group’s response to installing doors to the open fridges at their stores has been indifferent. Though the solution is highly achievable.

WWF-HK points out that installing glass doors on open display refrigerators not only can reduce energy usage by up to 50 per cent, it can keep food in a safe and cool environment which is what consumers are after. Hence, WWF-HK’s next step is to demand stores to adopt the ‘fridge door policy’.

But that’s not all. If the Government included commercial refrigerators in the current Mandatory Energy Efficiency Labelling Scheme, it would effectively motivate retailers to improve their energy performances of the existing devices and strengthen the city’s efforts in tackling climate change as a whole.