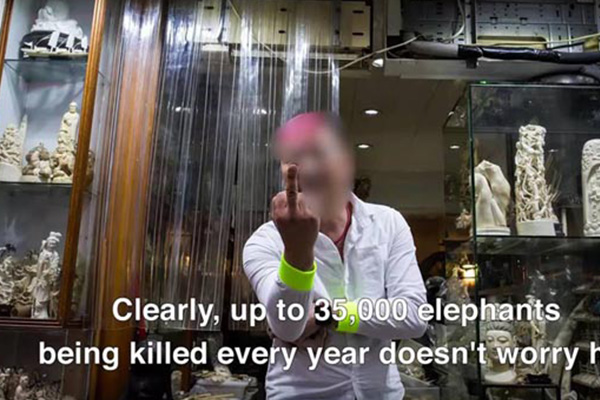 This op-ed appeared in the March 24, 2016 edition of the South China Morning Post.

Twenty-six years ago, the world called time on the international trade in elephant ivory, after it had halved African elephant populations within 15 years. Now governments in the US, China and Hong Kong are finally closing the remaining loophole that allowed domestic trade to continue and facilitated a second ivory crisis that has recently been claiming 33,000 elephants a year.

Hopefully, Japan, Thailand and other significant markets will soon follow suit and the elephants can recover. The positive news is that ivory prices have more than halved in China over the past 18 months, that drop apparently starting before the domestic trade bans were announced. Ivory traders at the Hong Kong Trade Development Council’s jewellery fair this month offered us ivory for US$380 a kilogramme, down to 20 per cent of what it was.

In January, Chief Executive Leung Chun-ying announced in his annual policy address [1] a plan to phase out the local ivory trade.
Amazingly, some traders in Hong Kong are calling for compensation [2] for not being able to continue to sell ivory. This would be totally wrong, if not immoral, given the pivotal role of these traders in stockpiling and bending the rules to create the ivory crisis in the first place. It would be like compensating people for knowingly selling stolen goods, because the law had caught up with them.

Instead of rewarding those who invested and speculated in extinction and whose abuse of regulations halved elephant populations, surely it is the families of the many rangers killed by poachers, or the child victims of civil wars financed by ivory – or the African nations that have lost millions in tourism revenue and spent millions fighting poaching – who should be compensated by the traders whose activities caused the problem? They won’t be, of course, and that’s why its morally offensive that the perpetrators of the elephant slaughter should even suggest that they be compensated.

Industries of all kinds fall into disfavour and become obsolete for moral, legal and economic reasons and almost none, if any, are compensated. Why should the 370 companies and individuals in Hong Kong that have had 26 years’ notice to sell down their stocks get special treatment? When foot binding was banned, did we compensate foot binders? Were slave owners compensated when that abominable practice was abolished? Of course not.

Since the inception of the Convention on International Trade in Endangered Species of Wild Flora and Fauna (Cites), elephant ivory has been subject to some level of control. Thus, restricting the trade in ivory is not a new, unprecedented development. Traders in Hong Kong have had 26 years to sell off their stock – possibly the longest “going-out-of-business” sale in the history of the planet.

The fact that their reported (but unchecked) stocks stopped declining just when demand for ivory was peaking indicates they were topping them up with fresh ivory from poached elephants, knowing that the authorities were asleep at the wheel. Indeed, they have been selling most of their stock to mainland Chinese, in full knowledge that it will be smuggled across the border. It is not uncommon for them to offer tips on how to do this.

Much of the so-called “legal” ivory, of which 670 tonnes was stockpiled in Hong Kong prior to the 1989 ban, was in fact from poached elephants. Between 1979 and 1989, half of Africa’s elephants “disappeared” into the ivory trade, the global hub of which was right here in Hong Kong. This represents in excess of 600,000 elephants, or 1.2 million tusks. So the chances are that much, if not most, of the existing stockpile in Hong Kong was from poached elephants in the first place. Should we be compensating the traders who laundered this ivory?

Traders can still sell their stocks. They paid a lot less for them than they are charging today and they are welcome to retain their ivory after the ban – they just won’t be able to sell it.

Give them six months’ notice of the ban that has been coming for 26 years and be done with it. Let’s consign the ivory trade to the rubbish bin of history where it truly belongs.

Alex Hofford is a wildlife campaigner at WildAid