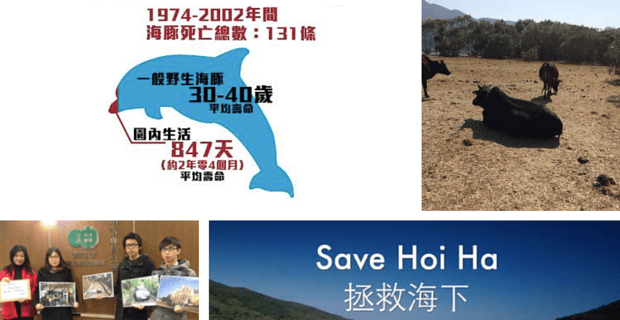 This month two petitions have been uploaded to SupportHK:

‘We demand the immediate return of the relocated Lantau cattle’, a petition organised by the Association For Tai O Environment and Development.

The wandering cattle in Sai Kung were relocated to Lantau Island by the Agriculture, Fisheries and Conservation Department (AFCD) last year. Since then various volunteers have visited the cattle and found them exhibiting worrying behavior, being stressed and panicking due to the lack of shelter in the area. The petition demands the immediate return of the relocated Lantau cattle.

‘Boycott Ocean Park for Animal Rights’, organised by the Dolphin Family, calls for people not to buy any tickets or annual passes to Ocean Park, until they promises to implement a “sunshine policy”- which will announce death of animals within 24 hours, the cause of death within 7 days, and a medical and post-mortem report in 21 days, in addition to providing a timeline to reduce and ultimately cancel all dolphin shows.

In addition we have the following updates from the existing petitions:

The Agriculture, Fisheries and Conservation Department have reiterated their refusal to consider incorporating Hoi Ha as a country park. A new 9-minute film has been released that highlights both the wonders of and threats to Hoi Ha and Pak Sha O. The film features actress and conservationist Sharon Kwok and is intended to raise awareness of Hoi Ha and Pak Sha O and the need to protect them for the benefit of Hong Kong people.

Remove shark-related products, including fins, from the menus of all Traditional Chinese Restaurants/Food Outlets, unless the products are proven to be from a sustainable source – Petition Organiser: BLOOM

The Hilton Hotel Group has just announced its intention to ban shark fin from April 1, 2014. This is an important move encompassing the hotels Hilton manages as well as own. Sign the petition now to persuade all restaurants in Hong Kong to join the increasing number of hotel restaurants and remove shark-related products from menus.

Save Hong Kong Trail –  Petition Organiser: Alliance for a Beautiful Hong Kong (ABHK)
ABHK filed a complaint with the Ombudsman’s office about mal-administration with several government departments, the complaints include:

Transport Department plans to issue car permits as they don’t consider extra cars will imperil the very large number of recreational users in the area.

The large new Septic Tank and Soakaway System fails to comply with EPD standards such as ProPECC.

Despite that 96% of public representations opposed to the project, the Town Planning Board has decided to ignored public opinion and have passed the application.

The 2014-15 Budget having been announced, is it revealed that the government is planning to launch a series of massive development projects around Lantau Island, including the proposed 3rd runway and an artificial island. It seems the government has forgotten this area is the home of the Chinese White Dolphin. The Chinese White Dolphin faces shrinking habitats and increasing threats. Sign the petition to support the designation of the waters around Southwest Lantau and Soko Islands as Marine Parks.