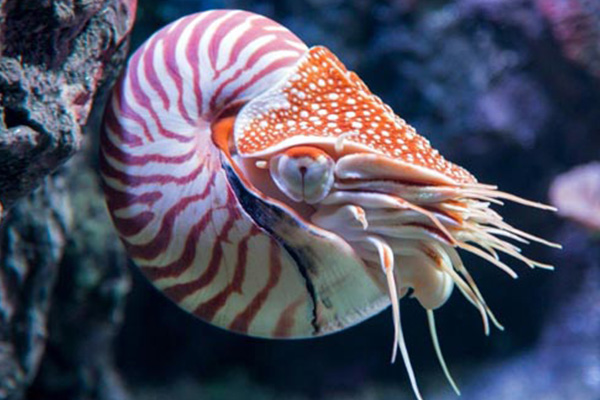 Often described as ‘pangolins of the sea’, there is very little known of nautiluses, which look like shells with tentacles. Very few people know of their existence and yet they are suffering under the pressures of international trade.

There are seven species of these bizarre-looking but beautiful creatures and they can be found on reefs in the Indo-Pacific, where most of these species are endemic to particular areas/countries. Not to be confused with Argonauts, which are often referred to as ‘paper nautiluses’, they are in fact completely different. Nautiluses are cephalopods, a class of marine mollusc, which makes them the cousins of squids, octopuses and cuttlefishes, although they live for much longer with some reaching up to 20 years old(i). They only mature sexually at 10-15 years of age and then only produce a small number of eggs per year, which take at least 12 months to develop(ii). This makes them vulnerable to overfishing. Along with many other marine species, they are also suffering the effects of climate change such as rising acidity, ocean warming and increasing levels of silt caused by deforestation(iii).

Nautiluses also have range limitations because of their shells. They are unable to tolerate a depth of more than 800 metres without their shells imploding. This makes populations both isolated, as they cannot venture into the deep, and an easy target for fishermen. Furthermore, they cannot recolonize an area that has been overexploited.

Nautilus fisheries are driven by the beauty of their shells, which are in demand internationally as ornaments, jewelry and as souvenirs for tourists. Over the past ten years, the US alone has imported more than 900,000 nautilus products, and Europe, too, is another major importer(iv). In fact, demand exceeds supply in some range states such as American Samoa, which imports nautiluses as well as maintaining its own fishery.

Unfortunately, because of the overfishing and their severely isolated populations, it is unknown how many nautiluses are left. This is why they’re not officially listed on the IUCN (International Union for Conservation of Nature) Red List of Threatened Species, but given that they are naturally rare with small, isolated populations, it is highly likely they would appear in the threatened spectrum. An animal that has roamed the seas for the last 500 million years (that’s 265 million years before dinosaurs appeared) could be at risk of going extinct before we know it. Nautiluses have thus survived every mass extinction event on earth, only to be potentially wiped out by humans.

At the recent CITES (Convention on International Trade in Endangered Species) conference in Johannesburg (CoP17), all seven species of nautilus were listed under Appendix II, meaning that international trade in this species is now regulated. It is hoped that this will help to safeguard these remarkable animals and prevent their disappearance from our oceans forever.