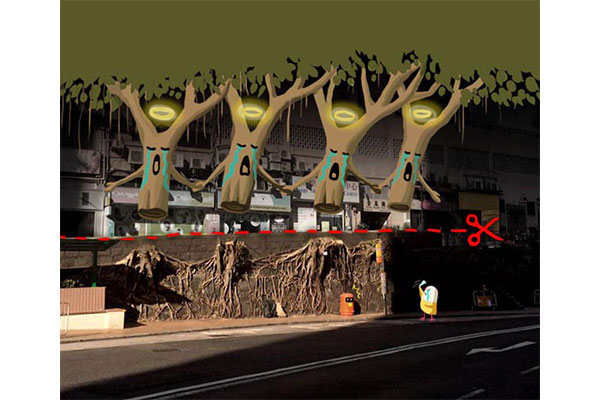 A giant stonewall tree fell on Bonham Road, Mid-levels, during last month’s amber rainstorm, leaving two people injured. One month passed, and on August 7 the four remaining trees captured our attention. However, this time it was government that felled the remaining wall trees.

The four trees axed by the authority were all Ficus microcarpa. According to Professor Jim Chi-yung, better known as the ‘Tree Professor,’ those four trees were indeed precious and had high historical value. The oldest was over 100 years old, while the younger ones were around 70-80 years old. In fact, the government’s actions have triggered a heated debate among the public. We have concerns over the axing.

Why is there concern?

Concern (1): Was the decision made in haste?
After the falling tree incident last month, the Expert Panel on Tree Management under the Tree Management Office (of the Development Bureau) had convened an urgent meeting to assess the state of the remaining trees. The members of the panel made an on-site inspection on August 3 and it was concluded that the remaining trees were not at risk of collapsing and it was unnecessary for them to be axed.

Unfortunately, although the District Council and the Tree Management Office was consulted by the Highways Department, the decision was arguably made in haste to axe the trees.

Concern (2): Why was the expert panel views seemingly ignored?
The tree experts had already illustrated that the four trees were not at risk of collapsing. However after axing the trees, the Tree Management Office cited a crack in the wall, as a potential risk to public safety i.e. the trees could fall.

Professor Jim deemed that ‘the government overreacted.’ The authority repeatedly claimed that ‘it was for the sake of public safety’, despite the fact the trees were considered to be safe. This raises the question of why have experts if their advice is going to be ignored.

The above incident has raised serious concerns about the authorities’ ability to effectively manage and importantly conserve Hong Kong’s valuable stone wall trees. As a result, new petition has been launched.

Sign and Support the Petition about Conserving the Stonewall Trees in Hong Kong
Owing to the unacceptable axing action of the government, Island West Dynamic Movement, Central and Western Concern Group, Pound Lane Concern Group, Sacred Hill Savers, and Alliance for a Beautiful Hong Kong have started a petition on supporthk.org, urging the government to explain the reasons for removing the stonewall trees at Bonham Road, publicize the tree evaluation report and set up a Conservation Management Plan (CMP) for the stonewall trees at Central and Western District. To all those who love and care about trees, please sign NOW at ‘Conserving Stonewall Trees in Hong Kong’.