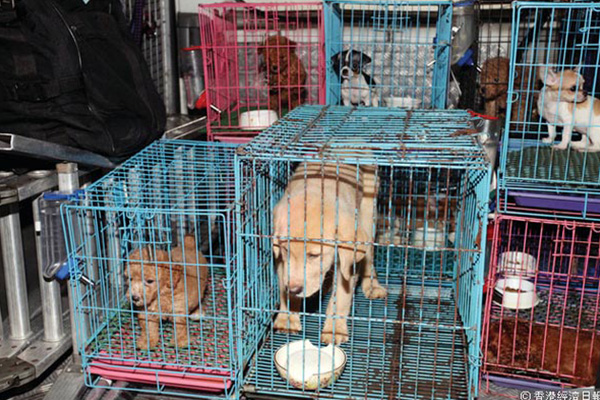 If you stop buying pets, the misery will stop.

Hong Kongers love pets, regardless of the size of our flats or how busy we are, many of us like to keep a pet or two, or more – mostly cats and dogs. This explains why the supply of pets never seems to run out in this town, quite simply the demand is high and breeders in Hong Kong are working hard to ensure that as many animals are bred as possible to supply the pet trade. But, did you know that in 2010-2011 for example, there were only two licensed commercial breeders in Hong Kong supplying just 4% of the 11,452 dogs sold in our pet shops. So where do the majority come from?

Unfortunately, Hong Kong’s animal welfare and pet breeding laws are lax. A loophole has allowed the growth of ‘hobby breeders’, who are in fact ‘self proclaimed pet owners’, and as such are virtually unregulated. According to the SPCA, true hobby breeders in theory “breed from a small number of their own pets, often a specific breed, as a “hobby” and not for real commercial gain. In this scenario, the dogs benefit from the personal attention from the owner and tend to be better socialised and have a higher standard of welfare”.

Unfortunately this definition isn’t the situation in Hong Kong. Here, without the need to abide by any commercial breeding laws or regulations, these ‘self proclaimed pet owners’ breed thousands of dogs with impunity, often in substandard environments, going unnoticed and unchecked, causing immense suffering and misery to the animals they breed – all for commercial gain.

Such improper practice has understandably raised the ire of many individuals and NGOs who are concerned with animal welfare. For years they have been urging the Hong Kong Government is thankfully aiming to tighten the laws to protect these animals. Only recently, it has proposed to amending the existing law (Cap 139B) to “strengthen the regulation of pet trading, including the breeding and trading dogs, in the interest of animal health and welfare”, according to AFCD. This amendment aims to protect animals through licensing. The license application is open to anyone and everyone, there’s no limit and the amendment only applies to dog, according to The Standard.

Although the proposed amendment aims to close the loophole, it has been opposed by numerous animal rights groups who advocate a ‘no trade’ policy. They fear that licensing will open the door to many more private dog breeders that the government doesn’t have the manpower and resources to regulate effectively. By giving out licenses to these self-claimed private dog owners, it will only mean legalizing the improper and once illegal practice.

So, will the government perform the necessary inspections from one residence to another after issuing the licenses to private breeders? Do they have the manpower and resources to do so? Unless these questions are answered by the government, the effectiveness of such an amendment in improving animal welfare remains in question.

While some NGOs think the government’s move is too small a step, others support the amendment and think this is a big step forward in the history of animal welfare in Hong Kong. An open letter written by Dr Howard Wong, Executive Director of School of Veterinary Medicine and Director of Centre for Animal Welfare explained that the government is finally taking action to close the loophole of the existing animal welfare and breeding laws which if, though it seems insignificant to some people. The introduced amendments to the existing legislation require individuals and shops to obtain licenses before they can sell dogs. In order to obtain the license, individuals and shops need to demonstrate that they have been and will provide reasonable breeding conditions for the dogs. Dr Wong said the system makes sense and is there to protect the animals. Even online traders need to display their registration number in all advertisements once the amendments are in place so that they can’t evade the laws like they do now.

From Dr Wong’s letter, we can understand why the amendment is good news, even though it’s not as good as a no trade policy (which to be honest is what Hong Kong needs). It shows that the government has recognised the fact that a lot of commercially bred animals suffer and are kept in cruel conditions and that the government is taking initial steps to combat the lucrative and illegal pet breeding business. Maybe a parallel can be drawn with its recent pledge to ban the ivory trade in Hong Kong. The process has been slow but is now happening.

Before a ban on pet trading takes place, what you as local animal lovers can do, is to keep the government informed of your opinions on animal welfare and the laws because they will continue the discussion and deliberation with stakeholders. What will truly help is to adopt animals from the many animal welfare groups in Hong Kong, rather than buy from pet shops and traders. There are plenty of animals waiting for a home. However, for the thousands of unfortunate animals (10,320 cats and dogs in 2009) that don’t make it to these groups and who start their life with hobby breeders – euthanasia is the only option, after what can only be described as a short and miserable life. When there’s no buying, the selling and misery will end.
————————————-