We participated in the Bi-City Biennale of UrbanismArchitecture (UABBHK) 2015 project and successfully strived for creating a one-hundred-foot farm, called Tree Gun Farm, run by community volunteers in Kowloon Park.

The farm successfully gained public awareness and media attention in a short exhibition period of two months. Not only does the farm educate citizens on running a farm and knowledge of growing organic crops, but it also lets them know about the importance of food safety.

The exhibition will end soon (10th March 2016). The farm is very popular among citizens and the operation of the farm is mature and effective. Many seasonal crops have been harvested from white radish to peppermint. Keeping the farm and continuing its daily operation has huge benefits to the community and citizens.

We now call to groups and the public to sign and support preserving the one-hundred-feet farm in Kowloon Park, and open more space for growing crops to citizens.

Started as an exhibition of the 2015 Bi-City Biennale of UrbanismArchitecture, the one-hundred-feet Tree Gun Farm created by Very MK located in Kowloon Park containing soil from North East Territories is home to many crops like carrots, choy sum, potatoes, sweet potatoes, vanilla, Chinese medicine mugwort and knotweed. Besides, we also grow Holy Basil – a sacred plant in Hindu belief and we invited the Hare Krishna Hindus Church to grow and manage it with us. The farm connects people and the harvest is contributed to the community. Everybody wins!

Now the exhibition has almost come to its end and is facing a removal, yet, seeing the farm has attained recognition from the public and had various good harvest, we therefore urge the Leisure and Cultural Services Department to retain the farm based on the following reasons:

Public and media recognition
The farm has been well-loved by the media and the Hong Kong citizens. In only two months time, the farm has been reported in Ming Pao, Sing Tao,Hong Kong Economic Journal, SCMP, Apple Daily, and the Commercial Radio 903. It also attracted various organizations to take part in guided tours and outdoor teaching activities, organizations included MaD Village Reinvented, St. James’ Settlement, Kong Yeah, Laughter Yoga, Hennessy Road Government Primary School (Causeway Bay) and Po Leung Kuk Chan Yat Primary School. They were amazed with how an temporary small urban farm can change the city and its lifestyle.Public education
In January, we gave an educational talk named ‘Is it possible to plant food in public area?’ to the public, followed by a session where the participants experienced planting in public space. This has set a firm base for future park/ urban farm.

Efficient communications technologies for smoother operation of farm
We maximise the use of different communications technologies to facilitate the operation and to organise activities. In the beginning of November 2015, we recruited more than 20 volunteers through Facebook to take part in building and regular irrigation done by shifts. It enabled the volunteers to do farming after work or at their leisure time. We make use of WhatsApp so that volunteers can report any urgent matters regarding the the farm via mobile phones. Volunteers are also able to receive latest information about the farm and to provide ideas or solutions, all of which keeps the farm’s operation smooth.

In addition, we use an efficient and user-friendly organization system called ‘Band’ that allows volunteers to sort and upload photos separately. It’s equipped with many functions such as a calendar, to-do tasks and voting, so the volunteers and even the public can find out about and join upcoming events and farm work. Band also contains many interactive functions, for example, voice messaging, attendance response and work record. When volunteers finish their work, they can mark it with symbols which make it convenient for other participants to follow. We have established a systematic work division.

Increased social interaction and social capital, creating a harmonious society
Some were worried about farm produce theft. However, we considered this farming experience as a ‘Give & Take’ in the community – a process in which people contribute and the needy take what they need. During the two-month farming period, some students took the crops with them after visiting the farm as part of their General Studies. They were also given knowledge on the different sources of food In fact, we have witnessed many ‘Give & Take’ moments.. An old lady who visited the farm said that she couldn’t afford the vegetables in the market because they are expensive, therefore we asked her to to bring home some carrots, watercress leeks and TongHao from the farm to make a delicious meal. A Filipino maid who didn’t have extra money to see the doctor due to low income. She was so happy to see the Chinese mugwort as it could cure her illness! Some people even put carps in our fish tank! An old lady living nearby visited the farm every day, one day she brought a few goldfish and put them in the fish tank too. These ‘give and take’ activities has proved that the farm adds value to the Park, by allowing more interactions between the Park and its visitors, while its space being optimised.

The above is only a small number of good examples during the two-month exhibition period to illustrate the benefits of the farm. If more farm area will be opened for growing crops, not only can it attract more visitors but it can also produce a higher social capital where the citizens’ quality of life can be increased. 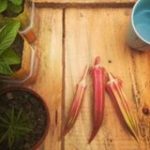