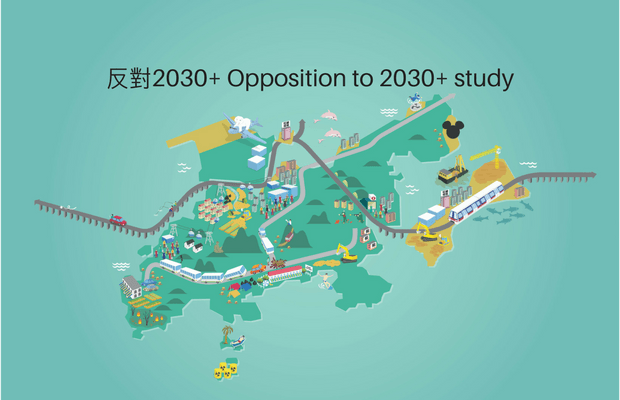 The government has settled a public consultation to two districts (Lantau Island and North New Territories) for development purpose based on a rough estimation of land demand, calculated from incomplete reports and questionable data from Hong Kong 2030+ Study.

The progress is lack of procedural justice and was done without careful consideration of the residents from relevant districts, who could be severely affected. The indiscreet consultation also forces the society to undertake irreversible consequence due to tremendous development pressure.

For instance, North New Territories (Ping Che) Development Areas was earlier being excluded from the “North East New Territories New Development Areas Planning”, but is now again included in Hong Kong 2030+ Study. These development plans proclaimed the potential development capacity to developers and landowners, which resulted in eviction and land resumption. It also reflected government’s tolerance to developers for reserving lands. This mirrors a similar incident in Ma Shi Po Village, only it is with even more serious cases of forced eviction and land resumption.

The government has claimed that a population of 400,000 to 700,000 needs to be accommodated by developing the Lantau areas (mainly by reclaiming the Central Waters and developing the East Lantau Metropolis). This development plans to reclaim over 1,000 hectares of land, which would deplete half of Hong Kong’s fiscal reserves (400 billion). Other than that, it also would change the coastline of the Lantau Island and Hong Kong Island West and acutely affect the living environment of nearby residents.

The exaggerated estimation of the population is government’s usual stratagem to deceive public that developing the new metropolis could provide job opportunities to potential labour force, in order to delude public into supporting the reclamation. The government has deliberately withheld information regarding the Feasibility Study by the Civil Engineering and Development Department, which hindered residents to acquire a thorough understanding on the development’s impacts on transportation, landscape and public spaces. In short, the ‘fake consultation’ is a tactic to deceive public, which is disappointing and unacceptable.

I oppose the government’s recently published “The Hong Kong 2030: Planning Vision and Strategy” (or “HK2030+ Study” in short). My reasons are as follows:

2. Instead of conducting proper research following with consultation, the government deliberately concealed information. Although the East Lantau Metropolis (ELM) Plan of the HK2030+ Study is still being examined by the public during the consultation period, the Civic Engineering and Development Department had already allocated $9 million of its internal budget to initiate the “Technical Study on Transport Infrastructure at Kennedy Town for Connecting to ELM – Feasibility Study” which is slated for completion by mid-2017 , prior to any public consultation. Since the government has yet to disclose any information of this study’s scope and details, residents from the Western and Kwai Tsing Districts are unable to fully know the impacts on traffic, aesthetics, and public spaces as a result of these plans.

3. We should prioritise the wise use of brownfields and vacant lands. Prior to the launch of public consultation to HK2030+ Study, the Government had already approached to the Legislative Council to apply for fund allocations worth over tens of millions of taxpayer dollars to study strategic environmental assessments, transport and land use, trade A office buildings, business, trade and industrial zoning. They will be conducted by consultants or with departmental. Most of these studies are slated for completion in 2017. Meanwhile, the assessment on the situation with and use of brownfields have just begun in 2017. We think the government should wait until all studies are completed and disclosed. Furthermore, detailed data on vacant government lands and short term leases should be provide to the public so that the they can be aware of the current situation on land zoning and planning prior to the consultation on the vision and prospects of Hong Kong.

4. We should put an end to the wasted resources planned for the reclamation study. In April of 2014, the government had applied for funding from the Legislative Council for “The strategic studies for artificial islands in the central waters.” Prior to the end of the consultation period for HK2030+ Study, the government has plans to apply again for funding of about $248 million from the Legislative Council on such studies in early 2017. Most recently, the Civil Engineering and Development Department had applied for $56 million in funding from Legislative Council to establish the Sustainable Lantau Office.

5. Hong Kong will face a declining population. According to the forecast by the Census and Statistics Department, Hong Kong’s population will peak at 8.22 million by 2043. From then on, the population will decline to 7.81 million by 2064. With the expected completion of the ELM by mid-2040, the ELM cannot help to address the current housing crisis, but only serves to provide housing for 700,000 people when the population starts to decline.

6. The ELM plans will jeopardise the ecology in South Lantau. The construction of the ELM will comprise of building railway via a tunneling through the Lantau Country Parks, linking Mui Wo with Tung Chung. While this plan would connect South Lantau with other areas, there is no safeguarding of precious natural environments and the local ecology. This would lead to habitat destruction and unrestrained development.
The government has yet to provide sufficient evidence to demonstrate the need to build the ELM. According to estimates by civil groups, the capital cost for ELM are estimated at nearly 400 billion dollars which is equivalent to half of the government’s current financial reserves. Studies that are underway have yet to be made known to the public. Taxpayer’s dollars should not be further spent on unnecessary studies and the establishment of the Sustainable Lantau Office.

As such, we oppose the East Lantau Metropolis Plan, and demand the following:

1. The disclosure of all completed studies or studies that are underway as part of the HK2030+ Study and the East Lantau Metropolis, such as the scopes of these respective studies, mid-term reports and all relevant information;
2. Withdraw the funding applications for “The strategic studies for artificial islands in the central waters” and “Staffing Proposal on the Establishment of the Sustainable Lantau Office and the Re-organisation of Existing Development Offices” as well as the funding application for further studies on the “Technical Study on Transport Infrastructure at Kennedy Town for Connecting to ELM – Feasibility Study”;
3. Establish a Hong Kong land database, and incorporate proposals for the provision of other lands such as brownfields, vacant government lands, lands on short-term leases, etc; and
4. The Panel on Development of the Legislative Council should hold a public hearing on the strategic studies for artificial islands in the central waters.