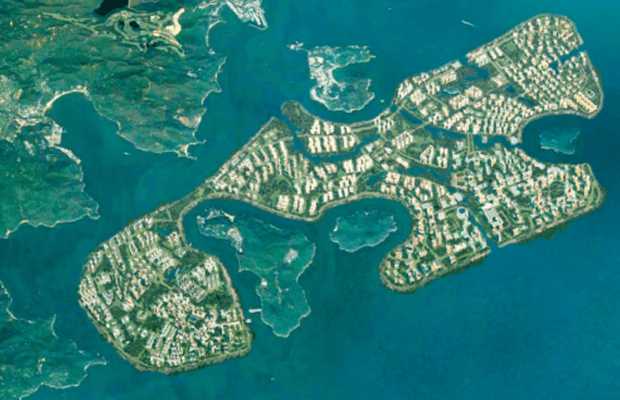 We Object Reclamation! Say No to East Lantau Metropolis!

East Lantau Metropolis (ELM) is to be created by reclaiming 1,000 hectares of land around the islets of Heiling Chau and Gar Yee Chau in the central water passageway and connecting them to Mui Wo in south Lantau. On these artificial islands will rise housing and infrastructure for up to 700,000 people, plus a business district, linked with the rest of Hong Kong by bridges or tunnels and railways. It will cost upward of HK$470 billion, an amount that is equivalent to constructing half a million public housing units. Since it cannot be completed until the 2040’s, it cannot solve the current housing problem.

The fact is, Hong Kong’s second CBD in East Kowloon is based on a plan that transformed a manufacturing-based area to a commercially-based one. The area will be expanding outward from its central core. Without a long-term economic policy, the creation of a third CBD in the East Lantau Metropolis is just a pipe dream and a bubble concept with no basis.

The government advocates the policy of housing ownership. However, with the influx of hot money, most of the available land ends up in the private market for the purpose of investment. More than sixty percent of the housing in the planned new development area is allocated for private ownership.

Since 2016, more than sixty percent of the housing units that are smaller than 400 sq ft are bought for speculation or as an investment to derive rental income. The government claims that increasing land supply will allow citizens to live in larger living space. It forecasts an average area of 807 sq ft for a private housing unit. But based on current housing price, can you afford an 807 sq ft flat? Hong Kong housing units have become a global investment product and not homes for its citizens.

In addition, we cannot overlook the environmental impact of global warming resulting in rising sea level. Being in the middle of the sea, East Lantau Metropolis and its residents will be in a vulnerable condition.

To Task Force on Land Supply,

I object reclamation, my reasons are as below:

This petition was started by 守護大嶼聯盟 Save Lantau Alliance on September 6, 2019, with an end date of December 31, 2019.