3000 Signatures Were Needed, This Campaign Was Victorious! 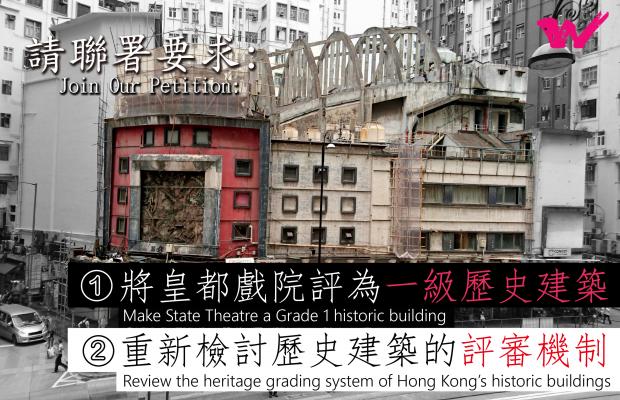 Secretary for Development, Antiquities Advisory Board, Executive Secretary of the Antiquities and Monuments Office,

An internationally unique piece of architecture, the former State Theatre (built 1952) in North Point recalls the heyday of Hong Kong cinema and holds precious collective memories from post-war Hong Kong.
However, in a serious underestimation of the heritage significance of this true Hong Kong treasure, the Antiquities and Monuments Office (AMO) proposed in April 2016 to give a Grade 3 – the lowest classification in the local heritage grading system for historic buildings – to the theatre. Your support for the protection of State Theatre is now needed as it faces demolition.

The grading of all historic buildings in Hong Kong begins with a ‘scoring exercise’ by a five-member AMO assessment panel. But a report by RTHK’s This Morning programme in late May revealed that some of the panel experts rank different historic buildings simply by age, while dismissing the importance of social value and collective memories, as well as the value of Modern Movement architecture like State Theatre. These problems show that the official assessment mechanism and criteria for historic buildings in Hong Kong are both outdated and at odds with public expectations.
Further, when asked to justify the low proposed grade for State Theatre, AMO unconvincingly explained that it was mainly due to what they claimed to be the rather large extent of alterations inside the theatre. Yet, AMO subsequently conceded that they in fact did not have a full picture of what internal alterations might have been made to the theatre. In July, a site inspection by cultural heritage group Walk in Hong Kong found that the original internal structure of the building, as well as the former theatre space itself, have all been kept. These major factual discrepancies show that AMO’s assessment is not only unprofessional, but that it is also a case of maladministration.
The grading of historic buildings is a serious matter, for it decides the fate of heritage that belongs to seven million Hong Kong people. It is expected that the Antiquities Advisory Board (AAB) will make a decision about the grading of State Theatre at their next meeting in December. Your support is now needed to prevent this Hong Kong landmark from disappearing, so that it could be given a chance of a new life.

WE INVITE YOU TO:
1. Sign a joint petition to the AAB, asking it to make State Theatre a Grade 1 historic building, so that it could be given a chance of a new life.
2. Volunteer with us. We need support with graphic design, research and history interviews, as well as to set up a ‘shadow AMO’. If you’re interested, please email: [email protected] [email subject: State Theatre project]
3. Share your State Theatre stories, photographs or memorabilia with us. Please email: [email protected]
Act now! Let’s petition the AAB to make State Theatre a Grade 1 historic building!

1. The Antiquities Advisory Board to make State Theatre a Grade 1 historic building
State Theatre is an internationally unique piece of architecture because of the exposed reinforced concrete roof trusses that soar over the building, which make it an imposing urban landmark. The theatre has retained a good degree of authenticity internally despite its conversion to a snooker club in 2000 – the original internal structure and the former theatre space have all been kept. This precious symbol of the most popular form of post-war mass entertainment recalls the heyday of Hong Kong cinema, and it also serves as a rare reminder of North Point’s “Little Shanghai” in the 1950s and early 1960s. The heritage significance of State Theatre should be duly recognised and protected.

2. The Antiquities and Monuments Office (AMO) to review the heritage grading system of Hong Kong’s historic buildings
Throughout the controversy over the grading of State Theatre, the AMO’s assessment panel has failed to convince the public that it has the requisite specialist knowledge in such areas as post-war architecture, cinema/theatre architecture and the history of Hong Kong cinema to carry out a fair appraisal of the building. The AMO should reform the assessment panel, which now only has five members, by bringing in more experts from different specialist areas. It should also recognise the fact that different experts will be required depending on the nature of different buildings. Moreover, the AMO should increase transparency of their decisions by giving the public clearer and more detailed definitions of the assessment criteria they follow when grading historic buildings.

Joint statement by Walk in Hong Kong, The Conservancy Association and Docomomo HK to the Antiquities Advisory Board on State Theatre, 15/4/2016

活現香港、長春社、Docomomo HK 聯合聲明 促請古諮會將舊皇都戲院至少評為一級歷史建築 ｜ Joint statement by Walk in Hong Kong, The Conservancy Association and Docomomo HK to the Antiquities Advisory Board

Heritage Value Assessment of the Former State Theatre (in Chinese), 15/4/2016

https://www.hongkongfp.com/2016/04/16/heritage-and-architecture-group-de…
The Hollywood Reporter – Inside the Fight to Save Hong Kong’s Last Movie Palace, 14/3/2016

http://www.hollywoodreporter.com/news/state-theatre-hong-kong-inside-875198
RTHK’s This Morning programme – Investigation into the grading of State Theatre (in Chinese), 3/6/2016

Founded in 2013, Walk in Hong Kong is passionate about cultural tourism, heritage conservation and local history. Through well-designed walking tours and cultural experiences, we’ll take you on a journey into the lesser-seen sides of Hong Kong.