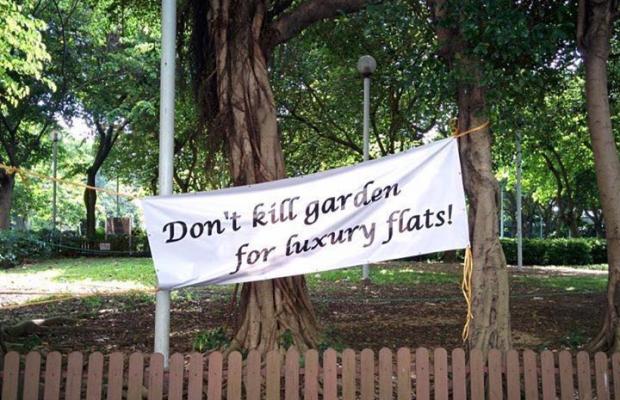 Secretary for Development, Town Planning Board,

To All Who Fight for Green Open Space and Object to the Government Theft of Land for Development,

The Alliance for Protecting Cadogan Park has been fighting the Development Bureau and Town Planning Board to conserve Cadogan Street Temporary Garden (“the Park”). We are supported by the newly-elected and environmentally-friendly legislative councillors to urge the government to turn the Park from temporary to permanent in the OZP S/H1/20. As the OZP is now in the Town Planning process, a hearing will be scheduled very soon so we do not have much time to save the Park. We urgently need your help: please sign this petition to request that the Park be changed from temporary to permanent. We hope that the Development Bureau can act upon our request.

To Secretary for Development, Town Planning Board,

We urge the government to change Cadogan Street Temporary Garden (“the Park’) in the OZP S/H1/20 into a permanent park so as to conserve the only grass park in this area for Kennedy Town residents.

The OZP S/H1/20 (“the Plan”) proposed by the Development Bureau is not supported by the local residents, as over 5000 representation letters were sent to the Town Planning Board (“TPB”) to request the conservation of the Park. Local residents strongly object to the Plan because it will bring many problems to us: the additional burden of new residents will cause traffic jams, demolishing the Park will worsen the shortage of open space and the high risks and costs caused by the decontamination work make people very fearful. Residents have many doubts how such a problematic plan was still put forward to the TPB for approval. We see that the consultation was poorly done and the government just focuses on money, while blatantly disregarding the living environment of current residents.

The decontamination work of the Park and its nearby areas is very undesirable. Its funding request was withdrawn from the Legislative Council Finance Committee in April 2016. In January 2016, The Central and Western District Council also requested the Development Bureau not to gazette the Plan in the TPB as more consultation was needed to be done. However, the Development Bureau still gazetted the Plan at the TPB in February 2016. What is the reason behind this? The decontamination work needs to take 7 years and with the building time added to this, the planned private housing will be finished 10 years from now. This cannot solve the immediate housing needs in Hong Kong. If the government starts to develop brownfield land now, we believe that it will take less than 10 years to supply many more housing units to the market. This is much better than blindly achieving a target number by picking the land from green open space or green zones.

I urge the government to change the Park from temporary to permanent, and the remaining part of the Plan should be discussed with local residents so as to satisfy the housing needs and resolve the problems brought by the Plan. The government needs to develop the brownfield policy immediately, instead of going here and there to grab land for building.

A concern group initiated and formed by residents from Kennedy Town. It focuses on projects at Cadogan Street Temporary Garden and land planning in Kennedy Town.