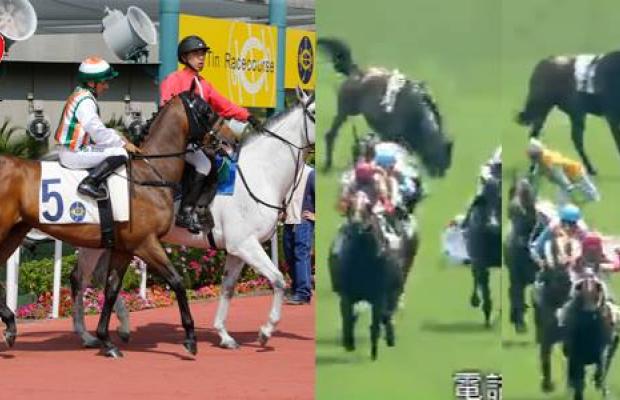 On 17th April 2017, there were two horse riding accidents at the Sha Tin Racecourse Stand. One of the horses involved, Mr. Oriole, fractured its front left limb and was euthanized on the spot, while four jockeys sustained injuries and were hospitalized. From the video footage of the event, one could see that Mr. Oriole was severely injured, to the point where its fractured limb was almost severed. The sight was alarming and heartbreaking. Mr. Oriole was only three years old and was killed after only three races.

The jockey activities arranged by the Hong Kong Jockey Club are the main source of legalized local gambling, and the HKJC’s standing on animal rights has been questioned by animal protection groups. In Hong Kong’s history of jockeying, there has been frequent accounts of horse injuries and deaths. The Hong Kong Animal Post found that in 2014-2016, there were at least 28 horse deaths related to jockeying. Of these 28 deaths, most of them were avoidable: horses were either euthanized after getting bone fissures during games, or died suddenly resulting from overtraining.

The animal rights group PETA has pointed out in their report that the jockey industry over strains horses before their bone structures are developed fully for full speed galloping, and that has brought around adverse effects on the equines. On the other hand, breeders attempting to create the fastest specimen often create horses that have extra slim limbs that are at a higher risk of bone fractures. Another factor causing equine injuries is the intensity of the competition at jockey events. In PETA’s findings, many of the race animals had to be administered medication to relieve pain brought about by the games. Furthermore, horses are naturally social animals, and growing up in isolation within stalls produces abnormal behavior patterns. Horses that are deprived of social companions are known to kick walls, chew on wood, or pace back and forth uncomfortably.

Horses that suffer from bone fractures are commonly euthanized because its remaining three limbs will no longer be able to support its body weight, and the injured leg is unlikely to ever fully recover. Injured equines are then considered to be void of any usable value by jockeys and owners, and so euthanizing them are the ‘most clean and efficient’ solution to minimize the animal’s suffering. After their lives being consumed in jockey events, the horses are killed upon injury without second thought.

Using animals for entertainment purposes is an unessential function of society, and in a modern society, backward practices like jockeying need to be phased out.

To The Hong Kong Jockey Club,

Jockeying condones the use of horses to entertain the masses, and an act of unnecessary cruelty. From breeding to training and racing, many horses suffer injuries or even death in the process, while the welfare of the animals are neglected.

We wish that the Hong Kong Jockey Club can improve their treatment of the stars in their races. Some of the possible measures include lessening the number of races, limiting the maximum number of horses an owner can have and introducing fines or suspension penalties for horse injuries resulting from overtraining. These measures could act as deterrence against overtraining by the horse trainers. Of course, the ultimate hope is for the complete phase out of jockeying, and the removal of its cruel and barbaric practices from a civil society like Hong Kong.

Thank you for listening to the feedback from your citizens!