500 Signatures Were Needed, This Campaign Was Victorious! 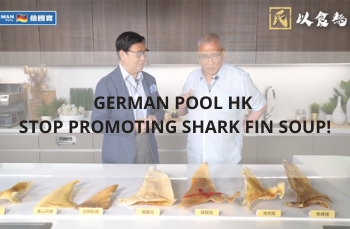 We would like to request that German Pool HK stop promoting the consumption of shark fins in shark fin soup as observed in the video posted as below:-

Although we recognise that the video suggests to use stockpiles rather than newly purchased shark fins, this sends a confusing message to consumers and is contrary to both public sentiment and the Beijing and HK government’s own internal policy.

In 2012 and 2013, shark fin was banned by the governments from being served in official functions. Public opinion surveys between 2009 and 2014 on shark fin consumption in Hong Kong indicate that the consumption of shark fin is increasingly unacceptable because of the issues highlighted below. Furthermore, over 45 airlines have refused to carry shark fins and growing numbers of companies in HK now no longer allow shark fin at company banquets.

As apex predators, sharks are an important part of the marine ecosystem, however, shark populations are declining dramatically. Human activity is responsible for an estimated 100 million shark deaths globally every year. More than a quarter of global shark and ray species are threatened with extinction. One of the key drivers is the excessive demand for shark fin.

According to German Pool Happy Kitchen, the purpose of this video is to provide a suggestion on reducing food waste. However as sharks are in many cases targeted only for their fins – via the practice of live finning, with carcasses being left to rot, this claim is clearly misleading to German Pool Hong Kong customers. It is thus extremely concerning to see multiple shark fins displayed in the video.

Hong Kong society is now more aware of shark finning and how consumption of the fins negatively impacts global shark population and the delicate marine ecosystem. In the aforementioned public opinion survey of Hong Kong residents in 2014, over half of the respondents had reduced shark fin soup consumption and 15.8% has completely stopped eating shark fin soup. Also a growing number of cooperatives including Maxim’s group, Cathay Pacific and Shangri-La Group have pledged to say no to shark products.

German Pool HK is well-reputed in Hong Kong’s home appliance market for its top-notch technology and high quality electrical appliances with a loyal customer base.  We thus strongly encourage German Pool HK to take the lead to promote sustainable alternatives for a better environment, rather than highlight the consumption of a species threatened with extinction and kindly remove the video posted on social media.

This petition was started by Hong Kong SharkFoundation 香港護鯊會 on October 19, 2020, with an end date of November 20, 2020.