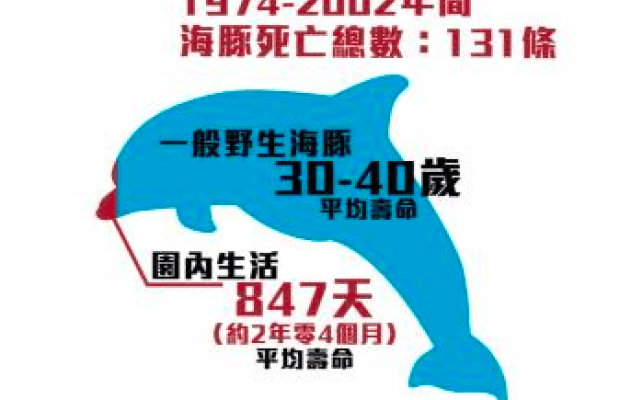 Why is an open and transparent marine animal importation policy essential?

“Ocean Park tried to purchase 30 dolphins from the Solomon Islands by species exchange in the past few years.As dolphin importation is banned in some countries, marine parks could obtain dolphins from countries with no such restrictions through species exchange. As such, it is essential that the animals’ origin and the method of importation are made public.”- Dr Samuel Hung Ka-yiu, Chairman of Hong Kong Dolphin Conservation Society
Animals in captivity are mentally stressed. Why?

“The average walking speed for human beings is 1.4/s, we need a space of about 2,000 sq. m. to feel comfortable. Dolphins move at 15 m/s, which is 10.7 times faster than we do, which means that dolphins need a space of 21,400 sq. m. Just as humans do not want to be imprisoned, dolphins do not want to be trapped in a small fish tank.”- David Wong, Convenor of Animal Earth
Is Ocean Park educational, or is it just a circus?

“Ocean Park compared itself to other world-class aquariums, claiming itself to have a noble educational mission, providing information about the ocean and promoting marine protection. But the “marine life circus” in Ocean Park is actually only a part of a larger commercial scheme. If Ocean Park openly promotes itself as a circus, we can say nothing more; but the false education it is putting up right now is even more harmful to society!”- Mark Mak, Convenor of Commission for Animal Protection in 18 Districts
Why is dolphin hunting a cruel industry?

“Ever since dolphin hunting began in the 1960s, the capturing methods had become more and more inhumane. Hunters would use a sharp metal rod with wooden handle to block the dolphin’s blowhole. The wooden handle would then be used to stop blood circulation. This is unbelievably cruel.”- Ric. O’Barry, Producer of The Cove

We call for people not to buy any ticket or annual pass of Ocean Park, until Ocean Park promises to implement the followings:

1. Implement “sunshine policy”: announce death of animals within 24 hours, the cause of death within 7 days, medical and post-mortem report in 21 days.
2. Regularly provide information of imported animals and animals currently reside in the park, including their names, species, age, orgin.
3. Provide a timeline to reduce and ultimately cancel all dolphin shows.
4. Meet with parties that have signed this petition, Dolphin Family, and AFCD at least once every 3 months to review the conditions of animals in the park and reporting mechanism.